A matter of common sense 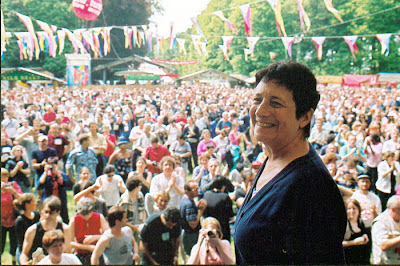 The following is an English translation of a leaflet being distributed this weekend by socialists in France at the fête of “Lutte Ouvrière” in Presles, near Paris.

Before the second round of the presidential elections, the employers' organisation MEDEF announced that it was not going to give any advice on which of the two remaining candidates to vote for, both "being favourable to the market economy", i.e., to call things by their name, to capitalism. One way as another of saying that the UMP and the PS are six of one and a half-dozen of the other; which every wage and salary worker having experienced the governments of both colours can only confirm.

The day before, and in her way, Arlette Laguiller said the same when she declared "Ségolène Royal as well as Sarkozy are in the camp of Capital, in the camp of the speculators, the exploiters and the sackers and are their good and loyal servants" (22 April). Which wage and salary however little lucid could not agree?

But then while, logically, the employers voted for their representatives, the candidates of the "left of the Left" called for a vote for a "candidate of Capital"! Is there any wonder that the immense majority of wage and salary workers are completely lost?

What is called the "market economy", "economic liberalism", "free enterprise" or whatever other euphemism is employed, the social system under which we live is capitalism. Under this, the means for producing and distributing wealth – society's means of existence – are the exclusive property of a dominant parasitic class – the holders of capital or capitalist class – for whose benefit they are unavoidably run (by wage and salary workers!)

The health, the well-being of the population as a whole are sacrificed when they threatens the selfish profit of this owning minority. And who has not heard of veal with hormones, mad cow disease, the pollution of the seas and rivers, global warming, the destruction of the ozone layer, so-called "social" plans, etc.?

The anti-liberal "Left" criticise this system but only propose reforms which, intentionally or not, allow it continue. Trying to reform this system for the benefit of wage and salary workers, to mitigate its effects, in short, to "humanise" it, is to ask a tiger to eat grass.

We are not calling into doubt the sincerity of the majority of the candidates and militants of the radical Left, but we do seriously doubt the effectiveness of their proposals.

For more than a century the reformists have had the chance of finishing with the problems of capitalism (unemployment, precariousness, poverty, insecurity, housing shortage, malnutrition, famines, wars), and despite the infinity of governments of all tendencies which have succeeded each other in the course of the 20th century, not only have these problems not disappeared, they have got worse and others, which we have already mentioned, have come to join them. And reforms obtained with such difficulty are called into question by the first "liberal" government that comes along (raising of the retirement age, reduction of unemployment benefits, non-reimbursement of social security, etc) while waiting for the calling into question of the 35-hour week and other goodies.

To finish with these problems which burden us, it is not an increase in the minimum wage or any other humanitarian measure that we need, any more than utopian and unworkable measures such as a "ban on sackings in enterprises that are making profits" (José Bové and LCR) or, put another way, the banning of "any collective sackings by large enterprises on pain of requisition, i.e. expropriation without repurchase or compensation" (Arlette Laguiller). Well before any candidate bearing such a demand had entered the gates of the presidential palace, the shareholders and owners of the targeted enterprises would have delocalised, thus throwing hundreds of thousands of workers on to the streets.

By definition, capitalism can only function in the interest of the capitalists. There is therefore only one conclusion: no rearrangement, no measure, no reform can (or in fact will ever be able to) subordinate capitalist private property to the common interest and so change in any way the position of submission of the waged and salaried majority to the selfish interests of the owning minority. Learning from past mistakes and not wishing to repeat them, socialists propose, as the only immediate and realistic solution, the establishment of the social ownership (hence the name of socialism) of society's means of existence, so as to ensure their management by (and so in the interest of ) the community as a whole.

We therefore launch an appeal to all wage and salary workers aware of the seriousness of the present situation and who want to bring it to an end not to patch it up. We hope it will be heard.
Click here for Wikipedia entry for Lutte Ouvrière
Posted by John at 9:00 pm

Thanks for your help in eliminating the last remaining vestiges of democracy from Venezuela, RCTV and Globovision. I look forward to more of your support in the future!

Sorry, Hugo, but if you think you can rely on our support you're wrong. But, on second thoughts, I don't think you are Hugo but some ignorant joker who thinks that Chavez is a socialist and that therefore anyone else calling themselves socialist must support him. For all he might be doing to improve education and health for ordinary people at the expense of the old privileged class (provoking them to send spam like this), Chavez is building state capitalism in Venezuela not socialism (which can't be built in one country nor by following any Lider).