Another War To Condemn 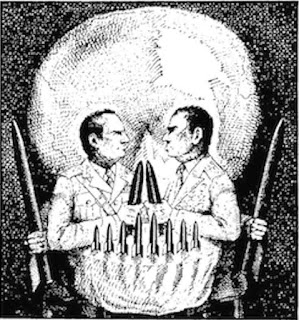 It now appears as if the Russian Federation has launched a full-scale attack upon Ukraine.

The World Socialist Movement is not concerned with the so-called rights and wrongs of this war, whether the niceties of international law were breached or if the sovereignty of Ukraine was disregarded. As workers, we are painfully aware that it will be fellow workers who will pay the blood price of the geo-political games played out by the Great Powers.

Ukraine isn’t the  “democracy” that Western politicians and media like to give the impression it is. In fact, the political and economic superstructure of Ukraine is not very much different from that of Russia. So the argument that it is “democratic” while Russia isn’t and that “we” must support it to defend “democratic values” is false.

The history of conflicts between states have left a legacy of antagonism between different groups, so they identify with their “nation-state” and the interests of its rulers rather than with their fellow workers in other states. Ukrainian nationalism has an ugly history. Before WW1 what is now Ukraine was divided between the Austrian-Hungarian and the Russian Empires and after it between Poland and Soviet Russia. Lviv, the centre of the pro-West faction in Ukraine was a major Polish city. During this period the Ukrainian-speakers were discriminated against by the Polish government. Under the Nazi-Soviet Pact the Polish part was annexed by Russia including Lviv. When Germany invaded Russia in 1941 many living in this part welcomed the Germans as liberators and many fought on the German side. Some served as concentration camp guards. The trouble for our fellow workers living in Eastern Europe is that history has dealt them a bad hand — no choice but to be dominated either by the EU-US or by Russia. It seems that the population of Ukraine is still divided over which, so providing both sides with pawns to play to further their interests.

Once again, it is incumbent upon ourselves to affirm that not a drop of working people’s blood should be shed in supporting either side of this capitalist conflict of which bloc can claim territory as part of its sphere of influence. Whether it is the Ukrainian nation or the breakaway republics of Donetsk and Luhansk, it is not worth the sacrifice of our fellow workers’ lives. Who cares which parasitic class claims to own which patch of dirt?

Capitalism operates according to its own logic and confrontation among capitalists is a normal process that has been taking place since the emergence of the capitalist system.

The WSM condemns the attitude of all those prepared to see towns and cities littered with the corpses of hundreds or thousands of working men, women and children.  For what? To prevent what would be in the main merely a change of rulers. Unlike others, we are willing to conceive of Ukraine losing its “independence” if it means that our Ukrainian fellow workers and Russian Donbas fellow workers are not sacrificed for such spurious concepts as “democracy” and “freedom”.

The WSM issue our declaration of peace.

Posted by ajohnstone at 6:11 am

“The Natural and Industrial Resources of Planet Earth are the Common Heritage of All Humans.”
Anything else is legalised theft.

It is necessary to abolish the private property system and the national borders to save the planet and the human beings.

I thanked you yesterday, I must not have done it correctly.

I sympathise with the WSM in general, but I think it is dangerous to "conceive of Ukraine losing its 'independence'". We may be opposed to the concept of nation states but it is not helpful to speak in terms that aid Putin's propaganda.

By the way, I am absolutely certain that the great majority of those who read this post would rather live in a bourgeois-democratic Ukraine than in Russia, which is becoming a more and more oppressive state, just like they would prefer South Korea over North Korea; it's ridiculous to pretend otherwise.

What we need to emphasise though is that even if one alternative is worse than another, we need to put and end to the system that keeps presenting only bad options.

You assume that Ukraine's credentials are more liberal than Russia's. This is debateable from the various index on democracy that exist that places Ukraine as not much better than Russia.

Fuller background on the pro-Russia political party bans and how they developed from 2014 here.

I agree with your final statement and it is our perennial problem of how we manage to condemn the lesser evil as well as the greater evil.

How do we lecture opposition to nation-states and against nationalism yet when it comes to a time that it matters, we start to equivocate?

It is true that none of the countries score high in democracy, but the situation in Ukraine is certainly better than in Russia.

Freedom of the press index:

I think it is important that we put forward a perspective that is opposed to all fractions of the ruling class without pretending that all situations under capitalism are equally bad. Let's just keep insisting that socialism is the only real solution.

The mainstream media likes to depict everything in black and white, the goodies against the baddies, dumb down events to simplistic soundbites, but the effect of world affairs on working people is never as easy as that. Perhaps, the blog is guilty of this too.

I still believe in peace at any cost to end the war, which is disparaged by the msm as appeasement.

Can I draw your attention to this other blog post, an on-the-ground report from the other side.

I still maintain this is a war between oligarchs and neither side is deserving of the blood spilt by working people.

As Einstein said, all nationalism is a measles on mankind, and the pro-war Left are resurrecting arguments of the self-determination of nations that Rosa Luxemburg and Karl Leibknecht dismissed over a hundred years ago.

My big fear is that the war has global ramifications on the most vulnerable peoples, those who rely on Ukrainian and Russian food supplies, who won't be able to afford the price-gouging of other alternative sources.

But I fully endorse your point that socialism is the only solution and even when this war ends, another will break out somewhere else for the same underlying cause...to benefit a particular ruling class,