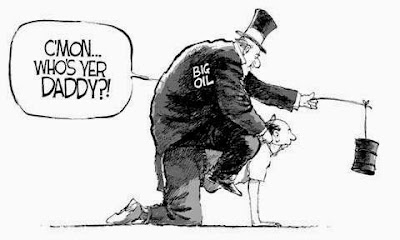 The 2013 study “Oil and Carbon Revisited: Value at Risk from ‘Unburnable' Reserves,” from the giant global bank HSBC explained:
“The IEA's World Energy Outlook (2012 edition) estimated that in order to have a 50% chance of limiting the rise in global temperatures to 2ºC, only a third of current fossil fuel reserves can be burned before 2050. The balance could be regarded as ‘unburnable'.”
For only a 50% chance of a livable world in 2050 the remaining two-thirds must be wasted (left permanently in the ground).

Bill Gates, what's not good enough seems to be instead too good, too much. He doesn't want merely for those two-thirds to be burnt; he wants even more oil and gas and coal to be discovered; he wants to add yet more to these unburnable reserves. According to Gates fossil fuel divestment alone will not halt climate change and the Bill & Melinda Gates Foundation will continue its investments in like BP.

He was “rejecting calls from environmental campaign groups for shareholders to dump holdings in oil and gas companies, on the grounds this will have little impact.”

This money that his Foundation is investing props up these companies' stock prices, so that even more oil and gas can be discovered and added to their existing stockpile of unburnable reserves. Exploration, after all, is what a company like BP does: it explores for and develops — sends to market — yet new sources of unburnable oil and gas. If it doesn't explore for yet more oil and gas and coal, then it simply dies. There are all of those sunk costs, which will kill it, even when they stop exploration altogether. If the assets that they've discovered in the past can't be sold, then certainly new such assets can't be sold — but Bill Gates wants his ‘charity' to pay (indirectly) to discover more such ‘assets.' He apparently wants to burn the planet. But, he says he doesn't; so, Gates himself also personally "will invest $2 billion in green energy.”

Bill Gates is another crook lying. Very rich people found a easy way have not to compete inside a free market. The dirty trick is much easy for them.
Socialists governments are centralists, and get themselves make laws to control everything they can. So very rich people, have facilities to associate with them. Obviously it is corruption.
So the socialist governement make a lot of laws, on the pretext of regulating the market to make a fairer society. In pratice these laws benefits the rich people, because no one more can do all legal requiremments to compete against them.
I'm from Brasil, a country governor by socialists/communists for more than 24 years. Here it is a commom practice.
Here starting a business is a daunting task and only corporations partners from government can grow.
Here in Brazil, about 18 years ago, Bill Gates made a deal with our socialist corrupt president, and sell a product called Microsoft Select, that cost about $ 7 millions one license. Every federal organization in Brazil bought one. There are hundreds of such organizations here. Only a little datail,
apart from laws passed at the govenment, which has benfitted Microsoft was the only possible winner for sell a product like that, the same license cost only $ 1 million in elsewhere in the world.

Many thanks for taking time to post your comment. Can i suggest you read a bit more of our interpretation of what socialism actually is.

As a socialist party that was founded over a hundred years ago, we have had plenty of time to develop our ideas on what socialism is. Over that hundred years there has been many political organisations and many governments that have claimed to be socialist. We have disputed and re-butted every claim and i think what you mistakenly call socialist are either capitalist governments implementing Keynsian economic policies or Leftist governments advocating state-capitalism. They use the language of socialism when it is popular with the voters and masquerade as socialists to capture votes.