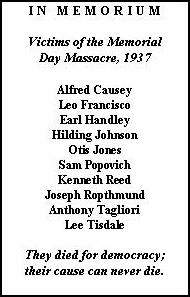 Never look a gift horse in the mouth. A day free from wage slavery may be just a day but it is to be savoured and enjoyed.

Memorial Day is a day of remembering the men and women who died while serving in the armed forces of the United States. Memorial Day is marked by many solemn ceremonies.

Socialists will be remembering Memorial Day 1937.

“It was a day for parades, picnics and boat-rides - and tear-gas, bullets and death.” - Howard Fast

During what was called the “Little Steel Strike” ten unarmed protestors were shot and killed while another 105 wounded or clubbed by the Chicago police. No policeman was ever prosecuted. A Coroner's Jury declared the killings to be "justifiable homicide".

The Steel Workers Organizing Committee (SWOC) was attempting to organize the steel workers into an industrial union. When the company refused to recognize the union the workers went out on strike. Strikers and sympathizers from all around Chicago had gathered on Memorial Day at Sam's Place on 112th and Green Bay Avenue , where the strike headquarters was located. The strike was less than a week old; the strikers had not yet felt the pinch of hunger, and there was a good sense of solidarity everywhere. Because it was such a fine summer day, many of the strikers brought their children. After a round of speeches, it was decided to picket in front of the Republic steel main gate and the crowd began a march across the prairie and toward the Republic Steel mill. They were stopped midway on 116th Street by a formation of Chicago police. "Stand fast! Stand fast!" the line leaders cried. "We got our right! We got our legal rights to picket!" The cops replied "You got no rights. You Red bastards, you got no rights."

While demonstrators in front were arguing for their right to proceed, police fired into the crowd and pursued the people as they fled.

Of the total of forty injured by gun shots two-thirds were shot in the back, according to medical testimony. As a union pointed out, if the marchers charged the police, they must have charged them backside forward! Witness after witness and report after report testified to the callousness and indifference of the police. The wounded were piled high on top of one another in patrol wagons.

Memorial Day in Chicago settled nothing. There as elsewhere the strike dragged on. Violence, disorder, unrest, loss of life accompanied it. In all the communities in the five states affected by the steel labor walkout the violent pattern of Chicago repeated itself. Before the strike ended eight more persons died. In Ohio the governor called out the National Guard, the steel mills were reopened and Guardsmen protected the few employees who wished to return to work as well as the strike breakers imported to crush the union. In Monroe, Michigan, the mayor called for civilians with military experience to enlist as special policemen and help break through what he called the illegal picket line. Many of Republic's mills and plants were under virtual siege as SWOC attempted to keep them from operating. The strike was eventually broken and early in July, 1937, the union called upon its members to return to work.
Posted by ajohnstone at 12:23 am