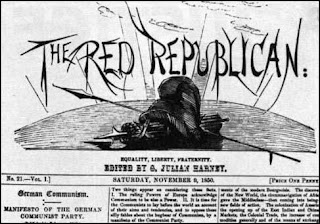 George Julian Harney, the son of a seaman, was born in the squalor and misery of Deptford on 17th February, 1817. In September 1840 he married Mary Cameron, of Mauchline, Ayrshire, daughter of a radical weaver. Harney died in Richmond, Surrey on 9th December, 1897, the last surviving member of the 1839 Chartist convention.


Harney was a more ardent radical than most English activists of his generation. He founded the London Democratic Association which attracted thousands of workers. Not surprisingly, therefore, Harney gravitated towards the more militant wing of Chartism. While most Chartists sought peaceful change, Harney was committed to a revolutionary overthrow of the traditional system and establishment. In a speech at Derby, 28th January, 1839, Harney declared:
“We demand Universal Suffrage, because we believe the universal suffrage will bring universal happiness. Time was when every Englishman had a musket in his cottage, and along with it hung a flitch of bacon; now there was no flitch of bacon for there was no musket; let the musket be restored and the flitch of bacon would soon follow. You will get nothing from your tyrants but what you can take, and you can take nothing unless you are properly prepared to do so. In the words of a good man, then, I say 'Arm for peace, arm for liberty, arm for justice, arm for the rights of all, and the tyrants will no longer laugh at your petitions'. Remember that.”

Harney pointed out that the General Strike, the National Holiday as it was called, then being advocated as a peaceful method of carrying the Charter, would, if carried through, only end in an inevitable civil war, and for this preparation was necessary. In May 1839 he wrote “...the fact is that there is but one mode of obtaining the Charter and that is by Insurrection." [Harney’s emphahsis] His efforts to swing Chartism behind physical force and immediate preparations to take power failed and earned him the censure of other Chartists and a reputation as a hothead.

He dismissed the idea that “moral force” was of any value in the immediate struggle, and asserted that the emancipation of the workers could only be achieved by their own efforts. He exposes alliances with the “liberals”:
"You see now through the delusions of your enemies. Nearly nine years of “liberal” government have taught you the blessings of middle class sway, blessings exemplified in “bastilles” and “water gruel,” in “separation” and “starvation” [Harney is referring the effects of the New Poor Law Act on the conditions in the workhouses]; in the cells of silent horror and the chains of transportation, in the universal misery of yourselves and the universal profligacy of your oppressors.” (London Democrat, April 20, 1839.)

He understood that the workers’ franchise had to lead to more:
“Unless the “People’s Charter” is followed by a measure equalise the condition of all, the producing classes will still be oppressed.”

In 1844 Harney proceeded to build up the Fraternal Democrats, a society of Chartists and European exiles. The Fraternal Democrats issued a manifesto, giving a sort of exposition of their political and social creed: “ All men are brethren. We denounce all political and hereditary inequalities and distinctions of castes …. We believe the earth, with all its natural productions, to be the common property of all …. We believe that the present state of society, which permits its idlers and schemers to monopolise the fruits of the earth and, the production of industry, and compels the working class to labour for inadequate rewards, and even condemns them to social slavery, destitution, and degradation, to be essentially unjust.”

In an address to the Fraternal Democrats Harney declared “Whatever national differences divide Poles, Russians, Prussians, Hungarians, and Italians, these national differences have not prevented the Russian, Austrian, and Prussian despots uniting together to maintain their tyranny; why, then, cannot countries unite for obtainment of their liberty? The cause of the people in all countries is the same—the cause of Labour, enslaved, and plundered …. In each country the tyranny of the few and the slavery of the many are variously developed, but the principle in all is the same. In all countries the men who grow the wheat live on potatoes. The men who rear the cattle do not taste flesh-food. The men who cultivate the vine have only the dregs of its noble juice. The men who make clothing are in rags. The men who build the houses live in hovels. The men who create every necessary comfort and luxury are steeped in misery Working men of all nations, are not your grievances your wrongs, the same? Is not your good cause, then the same also? We may differ as to the means, or different circumstances may render different means necessary but the great end—the veritable emancipation of the human race—must be the one end and aim of all.”

Harney started his own newspaper, the Red Republican and attempted to use it to educate his working class readers about socialism. The journal of July 1850 explained :
“As regards the working men swamping all other classes the answer is simple – other classes have no right to exist. To prepare the way for the absolute supremacy of the working class preparatory to the abolition of the system of classes, is the mission of The Red Republican.”

In 1850 the Red Republican published the first English translation of The Communist Manifesto, describing it as ‘The most revolutionary document ever given to the world”.

Harney and his faction within the Chartists showed in embryo of the development of a class movement which refused the compromise of reformism.
Posted by ajohnstone at 11:55 pm