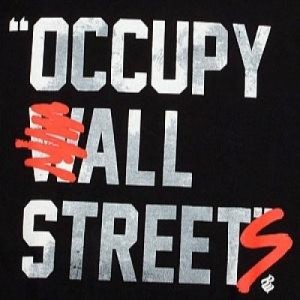 September 17 is the one-year anniversary of the occupation of Zuccotti Park. No matter what else it achieved, or failed to, Occupy Wall Street at least introduced a new phrase into politics. The slogan "We Are the 99%" clearly expressed the class divide that exists between the 1%, who own virtually the entire planet, and the 99%, who spend their lives in the service of that 1%, more often than not with the willing complicity of much of the 99%.  As unemployment and poverty reached record levels during the recession, the protest inspired hundreds of parallel occupations. Occupy Wall Street was part of a global revolt. Occupy Wall Street and its counterparts around the world exposed an economic system that only benefits the wealthiest 1%.

Another slogan often heard from Liberty Plaza was "Banks got bailed out, We got sold out" expressing an anger against the financial interests. It also raised the issue of betrayal of the many one-time Obama supporters, duped by his message of hope and change. The Occupy Movement  represented the re-awakening of radicals from their decades of slumber.

OWS with its consensus-driven, leaderless style, seemed to embrace the anarchist abolition of the state.However, collective decision-making as such is not direct democracy, unless it is formalised and consolidated. Many people were disillusioned because the general assemblies they attended were chaotic, without any serious co-ordination and with lack of power. Two main tendencies existed. The first one was directing these assemblies to be simply a part of this rebellion, to be organising spaces of this specific protest and struggle and work as centres of alternative information concerning this uprising and other crucial issues. The second tendency was arguing that these assemblies should be seen as potentially democratic institutions. They could form the basis for direct popular power, becoming arenas for local and general struggles. The prospect of their empowerment through cooperation and unification could challenge capitalism itself.

The Socialist Party has often argued that the vote and engaging in elections aren't useless but rather instead it just isn’t being used nearly effectively enough. However, to say as we do that we should mobilize at the ballot box is not to say that is the one and only option. Isn’t participation in elections just a way to to be co-opted into the capitalist system so we have to avoid anything to do with electoralism? Our societies are not absolute dictatorships like North Korea. Through historic struggles we have come to enjoy certain rights and liberties that protect us from being completely dominated by the ruling class. If we claim to speak on behalf of the 99%, this means that we have to find means through which the vast majority actually can be empowered. Participation in elections is one strategy to reach for that goal. It is not the only one that the movement should pursue, but it is an important one that it should not miss.

Unwilling to announce any particular goals, OWS emphasized the importance of movement-building and a consistent advocacy of autonomy and non-violence. OWS gave vent to the pent up anger of the 99%, and has inspired the people throughout the world to expose capitalism for what it is: a profit-driven system to enrich and empower a tiny minority at the expense of everyone else (although we must add the caveat that it also appears that not all participants in the Occupy movements are against capitalism.)

Despite these achievements, however, OWS does not seem to be growing anymore and the movement appears to have stalled. Occupy Wall Street was forced out of Zuccotti Park by police enforcing the private property rights of the owner, Brookfield Properties. Similarly, the Occupy Boston encampment was cleared on the basis of trespassing, and in Chicago, it was unlawful according to municipal code to be in public parks between 11PM and 4AM. Almost all Occupy encampments faced similar evictions. This should not have come as a surprise to the Occupy movement, as private and state property lies at the heart of the unjust economic and political systems to which the movement is calling attention.

The basis for a truly democratic society is dependent upon the shape and form of our struggles in the years ahead.