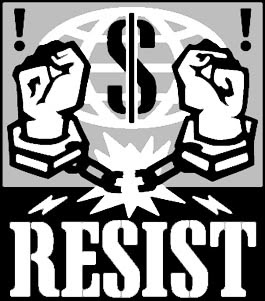 Stephen Harper, Canada's Prime Minister, threat to legislate back Air Canada workers is a blatant interference in the right to free collective bargaining. It also sent a very clear message that this government would be using the power of its majority to violate the legal rights of workers. And then within hours of Canada Post locking out its 50,000 workers, the Harper government indicated it might legislate these workers back as well.

The issues in both labour disputes are the same. Both employers want to strip collective agreements, including pensions. Both want a two-tier system so they can pay new employees less. The message to the next generation of workers is dismal. War has been declared against them. It's open season on workers and unions

Under the surface of this story of working people struggling to protect a decent living and retirement for themselves is one of hypocrisy, a growing income gap between the rich and the rest, and government collusion. The CEO of Air Canada, Calin Rovinescu, has held the job for about two years. In that time, he has seen his salary increase by 76 per cent in a single year to $4.55 million. He will be also paid a $5 million bonus in a few months and his “defined benefit” pension plan is worth about $3.1 million. At the bargaining table, he is attacking the pension of plan of Air Canada employees, including a proposal to slash the pensions of recent retirees. This attack comes after a decade of concessions by Air Canada employees. The customer service workers returned to work after a three-day strike but pensions and wages, which prompted counter staff and reservations personnel to hit the picket lines, are expected to feature in up-coming negotiations with the airline's flight attendants, pilots, mechanics and baggage handlers. The union says the flight attendants could be in a legal strike position by mid-August.

Postal workers across Canada could be forced back to work under a proposed law. Union leaders denounced the potential back-to-work legislation as an overall trend to erode worker's hard-earned rights. Canada Post has shut down its operations nationwide.

No strike can stop a government determined to have its way. In the end the logic of capitalism will always win out. It is a recognition of the harsh fact that under capitalism the workers are a subordinate class with only limited powers to affect the course of events, certainly far less than those of governments - an unequal distribution of power that is at the very basis of capitalism. Trade union activity, including strikes, is necessary as long as capitalism lasts but it can’t work wonders. Strikes are essentially a trial of strength, testing the situation; once it has become clear what the respective strengths of the two sides are as can happen fairly rapidly, though not always then both sides know where they stand and a settlement can be negotiated on that basis. This would not have been cowardice or betrayal but is taking the government’s superior strength into account and settling on the best terms possible in the circumstances. The conclusion is that if the exploitation and oppression of the working class is to be ended, we need to win control of the machinery of government so as to at least ensure that it is not used against us. In other words, the way forward lies in political action. Industrial action is essentially only defensive and has limitations due to the subordinate position of workers under capitalism. The struggle on the economic ﬁeld must be looked to and encouraged. But the workers must not be deluded into a false sense of power.

Socialists do not sloganise workers, nor do we use the union simply as a soap-box from which to harangue the membership. When issues arise we offer a class conscious interpretation of them, judiciously presenting the socialist analysis of day-to-day problems confronting labour. When workers are lock in combat with their employer, through strike action, socialists as an organised group should assist their fellow workers in whatever way they can. It is perhaps little known to a large majority of Canadian workers is the fact that what is now accepted without question – the principle of collective bargaining resulted from the 1919 Winnipeg General Strike. The suppression of labour unions in any country usually signifies the suppression of all organised working class resistance. This fact alone should make apparent how deserving unions are of socialist support.
Posted by ajohnstone at 4:18 am