Families will be nearly £900 worse off this year after the biggest squeeze on living standards since the 1870s. Rising energy, food and petrol prices have massively outpaced increases in household incomes over the past year. The disposable income of the average household is predicted to fall by £858 this year. The last time earnings had risen less than prices for four years in a row was the 1870s. Bank of England Governor Mervyn King has already suggested the squeeze is the worst since the 1920s.

A report yesterday shows that households have been suffering since at least 2006. While salaries are up by 13 per cent on that year, a basket of staple foods costs 40 per cent more and gas and electricity tariffs have leapt by 76 per cent. Incomes have been decimated by rises in VAT and national insurance and cuts in benefits and tax credits. Analysts at Ernst & Young say the fall in disposable incomes – the money left after tax and paying essential bills – over the past three years is ‘unprecedented’.

Andrew Goodwin, senior economic advisor to the Ernst & Young ITEM Club, said: ‘The squeeze on household budgets is only going to intensify this year, as the gap between high inflation and subdued wage growth continues to widen.’

Richard Lloyd of consumer group Which? said: ‘Yet more price hikes are on the horizon, and there’s a limit to how much people can cut their spending on essentials.’ 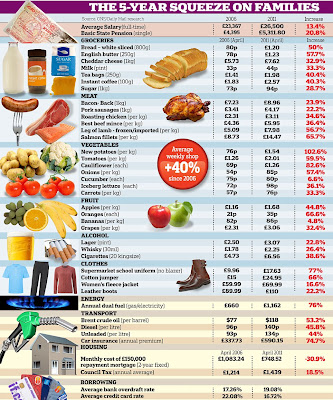 Taken from here
Posted by ajohnstone at 6:46 am

A growing number of children in the UK are living in extreme poverty because of huge increases in the cost of energy, petrol and food, according to a leading charity. Save the Children says the figure has risen to 1.6 million, with 290,000 in London. A family of four has seen their weekly food bill of £100 increase by £5 since last year, according to the British Retail Consortium. Harry Wallop, Consumer Editor of the Daily Telegraph, said that while inflation is affecting everyone, it is hitting those on low incomes hardest. "You have no choice but to eat and drink," he said "So if you have a relatively small income because you've been made unemployed, you've not been paid well or you've suffered from a pay freeze, then obviously it's going to hit you harder."
Last year over 61,000 people across the UK turned to food banks for help. Daphine Aikens, who works at a West London Foodbank said: "We have had people say to us that it has made then, or made other people, turn to crime to get food. "They get hungry, people who come here haven't eaten for a few days. We've seen people who have just been struggling so much that when we have given them the food, they have cried."
http://news.sky.com/skynews/Home/UK-News/16m-Children-In-UK-Living-In-Extreme-Poverty-Says-Leading-Charity-Save-The-Children/Article/201106316014185?lpos=UK_News_First_Poilitics_Article_Teaser_Regi_1&lid=ARTICLE_16014185_1.6m_Children_In_UK_Living_In_Extreme_Poverty_Says_Leading_Charity_Save_The_Children