Pamphlets from the archives 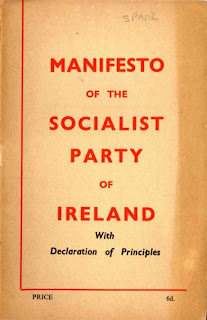 Available on PDF format two socialist pamphlets from the Socialist Party of Ireland, one from 1949 and another from 1976.

The text of the earlier pamphlet sounds contemporary in the current economic and political situation when we read . "To tell the the average worker in the Republic of Ireland that certain fluctuations on the New York or London Stock exchange may be more indicative of his future welfare than whether Fianna Fail or Fine Gael are returned at the next general elections would be indeed inviting derision. Yet that is the nature of capitalism"

On trade unionism
"...put not your trust in leaders - be they trade union or political leaders - who split and confuse you, but strive for that goal which can only be brought about by your own efforts...The necessity for the industrial struggle and organisation of the workers as against the employing class and its organisations ,is not denied by socialists. Being workers, socialists are also trade unionists , and engage in, and support all worthwhile trade union action, struggling side by side with their fellow workers on this battle-field"

On partition
"Why help to change a flag and leave the old enemy , capitalism, with its poverty and exploitation and class-border ? Why should socialists assist a clique that even now are eager to speculate with the blood of Irish workers in the markets of international catastrophe?"
Posted by ajohnstone at 4:23 am