Mayday is our day 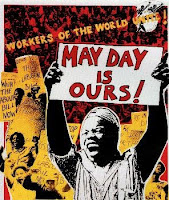 The First of May is the day when the workers’ movement celebrates its internationalism, and affirms the unity of their class across all boundaries. Mayday belongs to the workers. Although that means admitting that the rest of the year belongs to the capitalists it also means that we know who we are – the first step to changing our condition. That Mayday is commemorated by workers across the globe reminds us that we have a world to win and that we can win it. It is true that the First of May is traditionally the workers’ day, the day on which working people of all countries should express their solidarity with each other. The Socialist Party of Great Britain, and our companion parties abroad, celebrate the day in those terms. But the tradition has been debased by modern realities. Mayday as a cultural event seems to be dying. It has become increasingly dissociated from the cultural horizon of the vast majority of the working class—becoming a mere preserve of a few rank and file enthusiasts and the bureaucrats of the official Labour movement.

The Marxist economist David Harvey writes in The Independent:-
"May Day is the occasion we celebrate the grand achievements of the workers of the world in making our world a far, far better place to live in. There is, unfortunately, not too much to celebrate these days. The past 30 years are littered with battles and skirmishes that have resulted in defeat after defeat for organised labour...So what is there to celebrate? We would not, of course, have what we still have now (from pensions to the remnants of reasonable health care and public education) had it not been for the labour movement. But waxing nostalgic over the undoubted achievements and heroism of the past will get us nowhere. May Day should therefore be about relaunching a revolutionary movement to change the world. The very thought of doing that – even just saying it and writing it down – is as exhilarating as it is astonishing. But is this, too, a relic of revolutionary rhetoric from some bygone era? Or are we at one of those curious points in human history when the only reasonable thing to do is to demand the impossible?...An unstoppable movement of global revolt, perhaps, that says: enough is enough! It is our turn, the dispossessed and deprived of the earth, to want and get more...Zero growth is a necessity and zero growth is incompatible with capitalism. The necessity is, therefore, that we must all become anti-capitalists. Alternative ways to survive and prosper must be found. That is the imperative of our times. This is what we should commit to on this May Day."

SOYMB also says all need not be lost. Remembering that 364 days a year belong to their employers, workers can take steps towards wrenching Mayday from the grasp of alienated union officialdom, and making Mayday our day. Mayday is workers' day, the day of our class. However hollow the cries and futile the demonstrations, it remains the anniversary of protest, a continual reminder of exploitation and, subjection. “Class” is the reason and the theme of Mayday – class in its fullest, truest sense. The working class is not the labourers or the artisans or the machine-minders: it is all people to whom wages are life. The working class is international: so is its cause. Among the cries and chants and slogans of Mayday, only one has meaning: "Workers of all countries unite". Class consciousness was never more needed than now. To the Socialist, class-consciousness is the breaking-down of all barriers to understanding.The class-conscious workers knows where they stands in society. Their interests are opposed at every point to those of the capitalist class; their cause can only be the cause of revolution for the abolishing of classes. Without that understanding, militancy can mean little. For over a hundred years the Socialist Party has addressed its case to the working class on Mayday, demanding not support but understanding. In those years, it has seen movements rise and fall, heard slogans die away, known panaceas acclaimed and discarded. Reform is no answer, even though at times it benefits working people.The single, simple fact which all working people have to learn is that capitalism causes capitalism's problems, so that the remedy – the only remedy – is to abolish capitalism. In that knowledge they must take hold of the powers of government – for one purpose only: that the rule of class by class shall end. The task confronting us is to build up a union of the working class, organised to put an end to the property system that divides and oppresses us. Working class action, in fact, must be revolutionary. That is the real message of Mayday, for people all over the world. The workers of Britain have common cause with the workers of every other country. They are members of an international class, faced with the same problems, holding the same interests once they are conscious of them. There is only one way of realizing those interests: the immense productive powers of the world must become the common property of every man, woman and child.

Socialism is not a benevolently-administered capitalism: it is a different social system. The need for socialism grows more urgent each day. It awaits the conscious will of the workers of the world, and nothing more; when they desire it, it can be. On Mayday the voice of the Socialist Party is a small one, but it must be heard.
Posted by ajohnstone at 2:16 am

Email ThisBlogThis!Share to TwitterShare to FacebookShare to Pinterest
Labels: May Day, mayday