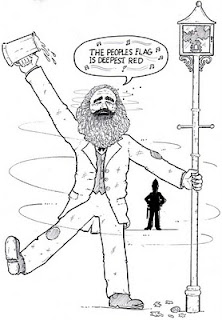 Karl Marx, the one-time almost unknown political refugee, the patient digger of economic facts in the British Museum Library, is now world reknown. Marx’s whole life was guided by the principle of “No Compromise”. Because of his refusal to submit to the rulers of Germany he was hunted down and put on trial for sedition. Paper after paper he was involved with were suppressed, and in their effort to crush “the terrible Marx”, the German powers even incited the French and Belgian Governments to deport him and hence he landed himself in London. Marx wasn't just a scholar, but an activist and commentator on the world he often painfully lived in. Marx laboured to keep the working class upon the right road to their emancipation. Amidst deepest poverty, hunted across frontiers, turned out of doors because of failure to find the rent, refused work even as a manual labourer, the mighty proletarian thinker never wavered from the work of his life. May 5th is the birthday of Karl Marx

No man's ideas have suffered more at the hands of his self-claimed disciples. Even in Marx's own time his views were distorted and misrepresented by would-be friends as well as opponents. Marx was a life-long revolutionist, but it is untrue to imply that he was nothing else, that everything he did and wrote was motivated almost exclusively by his revolutionary aims. Marx was thoroughly “human," very much of an "all-round man," a man intensely interested in philosophy, science and history for their own sake as well as for their bearing on the problems of the working class movement. He had a wide-awake intellect. Socialism became in Marx’s hands a part of social science. Marx was not satisfied to let the case for socialism rest on a mere philosophical theory. This led him away from philosophical speculations to the study of the different social relations within which humans had lived. Without the theoretical tools left by Marxism, the working class is bereft of a comprehensive understanding of the market system, class division and why capitalism must be overthrown in a democratic socialist revolution. It is precisely for this reason that his ideas are so feared by the ruling class and their representatives and why so much effort is expended on denigrating Marx and his thought.

Marx, together with his co-worker, Frederick Engels, came to the conclusion that the whole of past history since the passing of primitive communism, had been a history of class struggles. These classes – at one time slave owners against the helots, later feudal barons against burghers, now capitalists against wage-labourers – all had their roots in the changing conditions of wealth production and exchange. The material conditions, says Marx, are the foundation upon which rise all social institutions and when material conditions change so also do the institutions of society. Marx laid bare the method of robbing the wage-labourers. He showed that out of the value created by the worker’s energies, the worker receives merely enough to barely subsist on. The surplus of the value created goes to the exploiting employer. Hence there is a conflict of interests between the wage workers and the employers. The latter try to increase the amount of surplus-value and the workers struggle unceasingly against their masters, and must do so while the employers have the power to extract this surplus over the wages paid. Marx in his scientific study of the expropriation of surplus value uncovers the one and only source of profit - surplus value! Put simply, workers create more value than they receive back in pay, that extra wealth they have created becomes their free gift to the capitalist. And does the latter say thanks? No! Rather, he tries to extort even more!

Marx has either been maligned or ignored by modern economists, who merely rationalise capitalism on behalf of their capitalist bosses, but his findings are indisputable for they can be tested successfully against reality - his analysis checks out, scientifically and mathematically, because he got it right! This is why Marx, or rather his findings, are so maligned - the capitalist class don't want their trick to be found out on any scale. This class struggle is the cardinal principle of the socialist policy. And just as it was opposed in Marx’s day, so now the class struggle theory is fought against by all those who wish to blind the toilers to their true interests. The class struggle is present all the time, though workers will be more, or less, successful at fighting it at differing times. But it reaches into our lives all the time, every day - our income and our debts, our health, our access to educationm , our experiences at work, the stresses we end up enduring and even our life expectancy. Never mind what it does to our hopes, dreams and aspirations, not only for ourselves but for our fellow human beings with whom we share this planet. Capitalists are impelled to make more and more profits, they cannot do so if workers are eating into them asking for more money, even if that is to keep up with the bills and the ever increasing cost of actually living. So the capitalist must always be trying to depress wages and salaries to the lowest levels they can. This is not in any workers interest, ever. Marx rescued socialism from the hands of the utopians and placed it upon a foundation of scientific fact. Not moral appeals, but organised political action was the way to fight the capitalists. Society, said Marx, moved not because of changing morals, but under the pressure of growing economic forces making a change in social forms inevitable. Marx was the first to fully appreciate, that the action of men were not purely personal as so often stated in history. The individual is important in so far as they represent something much wider than themselves, some movement of the people. Marx saw the struggle between contending classes as the principal driving force in the development of human society.

Marx expected the working class to develop from a mere economic category (a "class in itself" ) into a revolutionary political actor ("class for itself")—but although the process started it did get stuck on route. A "class consciousness" did develop among particular sections of the working class but this did not develop into a revolutionary socialist consciousness. It stopped short at trade-unionism and labourism. Even if a working class "for itself" has never developed, a class consciousness of a lesser sort did. Marx believed that, as the workers gained more experience of the class struggle and the workings of capitalism, it would become more consciously socialist and democratically organised by the workers themselves. The emergence of socialist understanding out of the experience of the workers could thus be said to be ‘spontaneous’ in the sense that it would require no intervention by people outside the working class to bring it about. Socialist propaganda and agitation would indeed be necessary, but would come to be carried out by workers themselves, whose socialist ideas would have been derived from an interpretation of their class experience of capitalism. The end result would be an independent movement of the socialist-minded and democratically organised working class aimed at winning control of political power in order to abolish capitalism. As Marx and Engels put it in the Communist Manifesto, “The proletarian movement is the self-conscious, independent movement of the immense majority, in the interest of the immense majority.”

Socialism/communism, as envisioned by Marx, was to be a society in which the full and free development of every individual forms the ruling principle, a society "in which the free development of each is the condition for the free development of all", a participatory democracy organised without any political leaders or administrators at all. Communism/socialism puts an end to the division of life into public and private spheres, and to the difference between civil society and the state; it does away with the need for political institutions, political authority, and governments, private property and its source in the division of labour. It destroys the class system and exploitation; it heals the split in man's nature and the crippled, one-sided development of the individual. Voluntary solidarity, not compulsion. Marx used the word “association” to indicate the society he envisaged as replacing capitalism. And this term is useful in terms of emphasising how the members of that society will freely enter into production relations with each other to produce social wealth.

The Socialist Party can be described as a Marxist party, in that it recognises the immense contribution made by Karl Marx in developing a scientific understanding of capitalism as a distinct and transient society, one which was historically progressive in its time, but which is now outdated and needing to be replaced. Far from being outdated Marx's view on the development of capitalist ownership is continually being re-enacted in today’s newspaper headlines. SOYMB are no worshippers of leaders or "great men" but we recognise the work done by Marx, Engels and other contributors to the socialist movement. The best tribute to Marx is to recognise what is permanent in his work and put aside that which was dictated by the confused and temporary circumstances of the time in which he wrote. It is in this spirit that we celebrate his birthday. Happy Birthday Charley.
Posted by ajohnstone at 3:20 am