You have got what you voted for 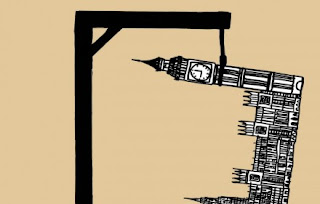 It may be apt to post what the Socialist Standard said the last time a British election resulted in a hung parliament in 1974. Very little actually changes even after all those passing decades .

In the last few weeks the politicians and commentators have been disputing about what the electors wanted, what the new Government will do, what will be in its next budget, will the policies work and will it mean more "socialism" or less. They are wasting their time and yours. The main outlines of your future in the next few years are already determined, and it would be just the same with a Tory Government, a Tory-Lib. coalition or a three-party government — a little more there, a little less here but nothing essentially different.

One small event in the recent election shows what kind of party the Labour Party is, for that life-long Tory, Enoch Powell, a dedicated supporter of capitalism, found it possible to vote Labour and tell others to do the same merely on the issue of keeping British capitalism out of capitalist Europe.

Back to the "Good Old Days"
A farcical aspect of the present situation is that these parties of capitalism, Tory, Labour, Liberal and Nationalist, have been forced by capitalism itself to abandon their belief in the futile doctrine of managing capitalism so as to make life better for all. In fact, if not in words, they have had to admit that they can't manage it and that the best hope they can offer is to go back to the mythical "good old days".

Replace a prospective 15 per cent rise of prices by perhaps getting it down to 12 per cent or 10 per cent. Back to poverty on £20 a week instead of poverty on £25 a week.
Get unemployment down to the level it used to be.
Go back to the "happy" days before the Prices and Incomes policy and the Industrial Relations Act.
Get house-building up to the levels of a few years ago.
Not forgetting that permanent feature in the speeches of every Prime Minister at all times and in all countries — call on the workers to work harder!

Nothing can be done to make capitalism satisfactory for the working class. Socialism is the only hope, not only for Britain but for the world.
H.
Socialist Standard, May 1974
Posted by ajohnstone at 6:25 am

Funny how things change and stay the same. It's clear that under capitalism, the political choices available are largely illusory. What do you think might persuade more workers towards the socialist case, and therefore persuade a greater number of people to reject the narrow capitalist agenda?

Sad to say that we are no further down the road to socialism than at any time,and we are loosing the battle for our knowing.

We live in a progressive capitalist society, that has all the tools at their disposal to propogandise their profit driven usery,and those open to a socialist mind for most, are contaminated with the capitalist philosophy of ownership and private property.A barrier difficult to break through.

I f we had the fascilaties at our disposal that the ruling capital class has, within 5 years, we would see a radical change to the philosophy of those most disenfranchised by the capitalist system.A following of those not contaminated by bourgeois liberalism.

After that negative rant,all i can say is, we do as we always do,keep educating.

Tom,
to try and answer your comment and your previous one, i think its a matter of following the physicians credo - first do no harm.The SPGB will not become entryists or a vanguard who proclaim all must follow and then take the workers to where they do not want to go ( even if they know where they are going, in the first place, that is )

The Holy Grail for socialists is how this socialist consciousness is going to arise , since we accept it won't solely be through the SPGB propaganda efforts, although we do not so readily dismiss the possibility that our educational attempts will have some bearing upon the situation.

The Socialist Party does not minimise the necessity of the worker keeping up the struggle to maintain the wage-scale, resisting cuts, etc. If he always laid down to the demands of his exploiters without resistance he would not be fit for waging the class struggle to put an end to exploitation.But class struggle without any clear understanding of where you are going is simply committing oneself to a never-ending treadmill.Leninists go wrong when they mechanistically think that a sense of revolutionary direction emerges spontaneously out of "the struggle".To bring about socialist consciousness involves understanding socialism which means talking about it, sharing ideas about it - in short educating ourselves and our fellow workers about it.

We come to a socialist view of the world by interacting directly or indirectly with others, exchanging ideas with them. And that is perhaps the role of the revolutionary group as being - as a catalyst in the process of changing consciousness.The question comes to making socialism an “immediacy” for the working class, something of importance and value to people's lives now , rather than a singular "end".

We cannot achieve this on our own so if you do sympathise and feel an affinity to the SPGB case,Tom , we welcome enquirers and i am sure there is a branch within visiting distance to yourself.

A,do we then desist from alluding to a better future,one without political perception or philisophical creed.

Is that not what our education is about and has been manipulated to know.

As you quite rightly state it is not for us to presume to control, as a socialist being.Yet the educatory being is controled by one of control.

As a socialist i have in my time battered my head against the control of capitalism, and those that purport to defend other.Only to come up against a bibical resistence in their defining creeds, that only lead to usery and missery.

I consider myself a full blown socialist no party but humanity,is that the wrong bus stop.