Marx and Engels on the Road to Socialism 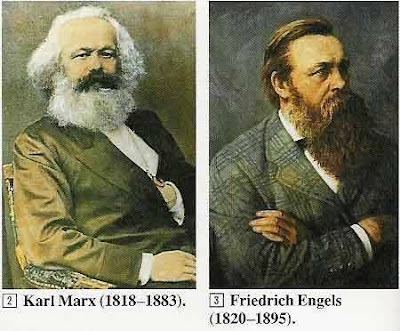 Organise Without Leaders
“The emancipation of the working class must be conquered by the working classes themselves.” – Marx, Address and Provisional Rules of the Workingmen’s International Association, 1864.

Seize political power
“The workers will have to seize political power one day or another in order to construct the new organisation of labour; they will have to overthrow the old politics which bolster up the old institutions, unless they want to share the fate of the early Christians, who lost their chance of heaven on earth because they rejected and neglected such action.
We do not claim, however, that the road leading to this goal is the same everywhere.
We know that heed must be paid to the institutions, customs and traditions of the various countries, and we do not deny that there are countries, such as America and England, and if I was familiar with its institutions, I might add Holland, where the workers may attain their goal by peaceful means. That being the case, we must recognize that in most continental countries the lever of the revolution will have to be force; a resort to force will be necessary one day to set up the rule of labour.”
-Marx, speech in The Hague, 8 September 1872.

Use universal suffrage
“Considering, That the emancipation of the of producers involves all mankind, without distinction of sex or race;
That the producers can only be free when they are in possession of the means of production;
Considering, That collective appropriation can only proceed from a revolutionary action of the class of producers – the proletariat – organised in an independent political party;
That this collective appropriation must be striven for by all means that are available to the proletariat, including the universal suffrage, which thus be transformed from the instrument of fraud that it has been up till now into instrument of emancipation…” – Marx, Introduction to the Programme of the French Workers’ Party, 1880

Full representation of labour in Parliament
In 1881, Engels upheld the Paris Commune Principle – election of delegates via universal suffrage revocable at short notice – as “…a new prospect … The new weapon … scarcely ever unsheathed … For the full representation of labour in Parliament, as well as for the preparation of the abolition of the wages system, organization will become necessary not of separate trades, but of the working class as a body. And the sooner this is done the better.” Engels, "Trade Unions", written on about May 20, 1881, Collected Works, 24, p. 388

Peaceful and legal revolution
“Surely, at such a moment, the voice ought to be heard of a man whose whole theory is the result of a life-long study of the economic history and condition of England, and whom that study led to the conclusion that, at least in Europe, England is the only country where the inevitable social revolution might be effected entirely by peaceful and legal means, he certainly never forgot to add that he hardly expected the English ruling classes to submit, without a ‘pro-slavery rebellion’, to this peaceful and legal revolution”.
-Engels, Preface to the English edition of Capital (1886)

Insight
“Marx, who drew up this programme to the satisfaction of all parties, entirely trusted to the intellectual development of the working class, which was sure to result from combined action and mutual discussion. The very events and vicissitudes of the struggle against Capital, the defeats even more than the victories, could not help bringing home to men’s minds the insufficiency of their various favourite nostrums, and preparing the way for a more complete insight into the true conditions of working-class emancipation”
- Engels, Preface to the English edition of The Communist Manifesto (1888)

You shoot first, messieurs les bourgeois!
"How many times have the bourgeois called on us to renounce the use of revolutionary means for ever, to remain within the law, now that the exceptional law has been dropped and one law has been re-established for all, including the socialists? Unfortunately we are not in a position to oblige messieurs les bourgeois. Be that as it may, for the time being it is not we who are being destroyed by legality. It is working so well for us that we would be mad to spurn it as long as the situation lasts. It remains to be seen whether it will be the bourgeois and their government who will be the first to turn their back on the law in order to crush us by violence. That is what we shall be waiting for. You shoot first, messieurs les bourgeois!

"No doubt they will be the first ones to fire. One fine day the German bourgeois and their government, tired of standing with their arms folded, witnessing the ever increasing advances of socialism, will resort to illegality and violence. To what avail? With force it is possible to crush a small sect, at least in a restricted space but there is no force in the world which can wipe out a party of two million men spread out over the entire surface-area of a large empire. Counter-revolutionary violence will be able to slow down the victory of socialism by a few years; but only in order to make it all the more complete when it comes
Engels (1892), "Socialism in Germany", in Karl Marx and Frederick Engels, Collected Works Vol 27, pp 240-41

What is to be done
“ … there could be no doubt for us, under the circumstances then obtaining, that the great decisive combat had commenced, that it would have to be fought out in a single, long and vicissitudinous period of revolution, but that it could only end in the final victory of the proletariat . . .But history has shown us too to have been wrong, has revealed our point of view of that time to have been an illusion. It has done even more; it has not merely dispelled the erroneous notions we then held; it has completely transformed the conditions under which the proletariat has to fight. The mode of struggle of 1848 is today obsolete in every respect . . .The time of surprise attacks, of revolutions carried through by small conscious minorities at the head of unconscious masses, is past. Where it is a question of a complete transformation of the social organisation, the masses themselves must also be in it, must themselves already have grasped what is at stake, what they are going in for, body and soul. The history of the last fifty years has taught us that. But in order that the masses may understand what is to be done, long persistent work is required, and it is just this work that we are now pursuing, and with a success which drives the enemy to despair”.
-Engels, Introduction to Marx’s “The Class Struggles in France 1848 to 1850” (1895)
Posted by ajohnstone at 5:40 am