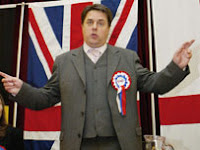 What have the British National Party, David Irving, 'equality watchdog chief' Trevor Philips, Dr Julian Lewis (not to mention a large number of other MPs) and groups such as Unite Against Fascism in common? It is not simply that all are would-be dictators; they uphold capitalism, each aiming to run in a particular way. A safeguard against them is needed, but it cannot come from force. The only safeguard is Socialist understanding. So, against the wishes of Lewis, Philips et al., let odious characters such as Nick Griffin and David Irving appear at at tomorrow's planned Oxford Union's Free Speech Forum, state their case, and have its worthless stupidity publicly demolished.

That is what these 'defenders of freedom' fear. The Socialist Party has a long tradition of offering the platform of debate to everyone. We have on occasion, for example, debated the National Front only to find members of the International Socialists (now known as the Socialist Workers Party) attempting to shout down both speakers. Why? They simply did not want the fascist claptrap exposed - because it would have exposed theirs too. To them, a brawl in the street is preferable to argument, and the support of hooligans acceptable because they cannot get that of enlightened men and women. One further example should help clarify the Socialist position. On the 8th May 1973 a Professor Eysenck, infamous for his views about the 'intellectual abilities of American negroes', was forcibly prevented from expressing his views at the London School of Economics. The World Socialist Society at LSE made the following statement on the importance of free speech.

"As members of the Socialist Party of Great Britain, we are opposed to all censorship, whether it be through the legalized violence as enforced by the courts of the capitalist state or by the violence of self-appointed moral or political guardians. Let there be no misunderstanding of the meaning of what happened last week. A body of people decided that the rest of us should not be allowed to hear certain views they considered objectionable; they took it upon themselves to use physical violence to achieve this end - and succeeded. In other words, they successfully censored what we should hear. But will they stop here? Will they now proceed to prevent Eysenck expressing his views in writing? And, after that, will they burn the books he has already written? And what are the prospects for those of us who disagree with them if ever they win control of political power? Will we be shot or just put into concentration camps? These are serious questions since they are the logical extensions of the policy pursued by last week's political censors.

There is a further point: all censorship - especially censorship of this kind, allegedly exercised for the benefit of the working class - is an insult to the intelligence of ordinary working men and women since it implies that they cannot be trusted to hear or read certain ideas and are incapable of making rational judgements on the merits of rival ideas. Those who favour censorship always assume that they are somehow superior to ordinary people and have the right to decide what ordinary people should or should not hear. Censorship is an elitist policy - but those who favour it here at the LSE such as the Maoists and Trotskyists have nothing but contempt for the ability of the working class to understand Socialist ideas and to establish Socialism by and for themselves.

The classic case for allowing unpopular minority views to be expressed - including those with openly anti-democratic ones like fascism AND Maoism - has never been refuted: if they are wrong then their case will perish in the course of free, rational discussion; if they are right then censorship delays discovering this. As our resolution passed by the Union last Thursday puts: "only in the healthy atmosphere of free expression can ideas be debated, false ideas debunked and sound ideas developed". We are always prepared at all our meetings to give opponents of Socialism a chance to express their views. For we are convinced that our views are right and this will be shown in any free debate - and if we are wrong we wish to know so that we can stop wasting our time. WE STATE unambiguously that ALL censorship is anti-Socialist and anti-working class.

Last week's incident has done one thing, if nothing else. It has brought into the open those who favour censorship of political ideas: the Maoists and Trotskyists. They have placed themselves in the same camp as the fascists themselves and stand exposed as the dangerous enemies of the working class prostituting the good name of Socialism.

We stand for the common ownership of the means of production, without distinction of race or sex, organised democratically." (Socialist Standard, June 1973)

Posted by hallblithe at 7:56 pm

I have a good deal of respect for the SPGB and the political positions you defend, but this is absolute crap.

It is unfortunate that, for the most part, fascists haven't been so keen to participate in the enlightened intellectual debate you advocate, instead prefering to physically attack anyone they see as an opponent.

For decades fascists in this country fought a low-level war for territorial control, attempting to drive non-whites out of certain areas and physically smash socialist/communist organisations.

They were defeated, but not by the arguments of enlightened men and women but by organisations like Anti-Fascist Action and the earlier incarnation of the Anti-Nazi League who fought them back and won.

To term those who fought against them and defeated them 'hooligans' only interested in brawling is not only ignorant but insulting. Those 'hooligans' are the reason we can sell socialist publications in the street and attend demonstrations without fear of attack.

I think you're exaggerating the "fascist threat". The BNP, NF, etc dont "physically attack anyone they see as an opponent". They see Labour, Tories, Liberals as their opponents but don't physically attack them. They do physically attack those who set out to physically attack them, mainly vanguardists. So, what's going on here is a battle between two groups physically vying for the leadership of the "white" section of the working class. The election of an increasing number of BNP councillors would seem to show that they are not being defeated by this tactic. And how can you stop people voting BNP except by trying to convince them not to? Or do BNP voters need to be beaten up too? The reason why we're able to sell magazines and give away leaflets in the streets is because the vast majority in this country believe this to be a legitimate activity and don't believe that political debates should be settled by street fights.

Hi Duncan,
I wouldn't have used the term 'hooligans' to describe anti-fascists like the AFA, but nevertheless whether or not their activities drove the fascists off the streets, it's doubtful that they succeeded in changing minds. If socialism is ever to come about, it requires the conscious understanding and desire of the vast majority of the working class, which necessarily includes those presently drawn to far-Right politics. You no doubt know that the majority of BNP supporters and probably members are not actually 'fascist', but are certainly confused and ignorant workers - capable, like us, of understanding the case for socialism, if it's put to them. (Not sure why you sneeringly call this "enlightened intellectual debate.") As for the streets being free for socialists to sell papers, I suggest this has more to do with the development of a democratic culture won through class struggle, of which the actions of physical-force anti-fascists is a relatively minor part.

Duncan ,
if you go to Wiki and read the history of AFA they comment that it was the 1993 election of a BNP councillor that signalled the switch of tactics from street fighting confrontations to electoral practice and the AFA followed suit by countering with "positive political alternative in these communities instead of concentrating on challenging the fascist presence on the streets."

The real battle becomes the battle of ideas , not fists and boots .

I think that was the import of the article which you criticise .

As an aside , it would also appear from reading the Libcom article on the AFA that it was also political outlooks and attitudes that resulted in so many breakdowns and disputes within the anti-fascist movements and reduced its effectiveness .

The SPGB aren't pacifists so if a community is physically attacked then , of course , we accept their right of self-defence , but what we add to this , is the reality that it is political ideas behind the sway racist beliefs hold for some and it is those that must be addressed to defeat fascism .

The article is very good but I'm a little confused: are you the Socialist party that evolved from Militant? If so your anti-racist group YRE stopped the BNP leafletting a london housing estate by organising whistle alarms- which is basically political censorship by intimidation. After all why can't a legal law abiding party leaflet anywhere? It's up to the recipients of these leaflets to accept or reject the pitch being made to them.

The description of AFA as hooligans is close to the truth. The stuff that they write boasting of their violence against the far Right has a definite reel into sickness. Rather than socialists with respect for human beings they come across as very nasty individuals gloating over knocking people unconscious. You have to remind yourself on reading the sniggering accounts of the brutality meted out- that the crime of their victims was merely that of the political views which they held: and we're supposed to be living in a democracy. I don't accept this cop out that the BNP attack black people. There are undoubtedly some unsavoury individuals inside the BNP but essentially they are a party seeking to achieve power by democratic persuasion.

I've just been told of the comment above, allegedly made by me.

It isn't - it's by a BNP braindead who goes about posting in my name.