The demise of Thatcher 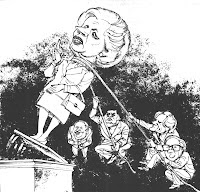 On this day in 1990 Margaret Thatcher resigned as Prime Minister of the United Kingdom, an event which prompted the following 'So What?' Socialist Standard editorial:

Who the hell cares which political dinosaur will lead the Conservative Party? What possible difference does the conclusion to this thieves' quarrel make to the vast majority of people living in Britain?

The Tories represent the interests of the parasite class which lives on the profits which are legally robbed from the wealth-producing majority. The workers, who are the overwhelming majority, have nothing to be gained by supporting the sordid ambitions of politicians. The Prime Minister is not the workers' representative, but the chief mouthpiece of the profit-protecting government.

The function of government is to rule over those who are the productive majority. The system in which the majority allows itself to be ruled - governed - oppressed by leaders is not democracy. Democracy means the rule of the people by the people. It means the administration of things, not the government over people. In a democracy there can be no leaders or led, for all people will co-operate to make the decisions which affect the life of the human community.

The irrelevant leadership battle is a sordid fight between the defenders of capitalism who think that it is their role to govern and ours to be governed. We are not invited to vote in their election; all we are asked to do is sit in front of our TV screens and gaze at the cynical tactics of a gang of political tricksters.

The Tory contestants were united by one policy; their complete and unequivocal support for world capitalism. In this they are at one with Kinnock and Ashdown. All of the politicians and parties of the profit system are solid in their rejection of any alternative to the way the world is run now. We live in a society where needs come second to profit and where those who possess do not produce while those who produce all goods and services do not possess the resources of the earth.

The real political contest is not about who will lead the Tory party and draw the prime ministerial salary. It is a battle of ideas about whether the working class majority will support and vote for production for profit or production for use. If workers vote for the profit system then it matters not a jot which of the con men leads which party of fakers. If workers opt for socialism, as historical necessity demands we should, the the question of leadership is irrelevant. No socialist would ever follow a leader; no socialist seeks to lead anyone else.

To the Tory tricksters we say "A plague on both your houses!" Socialists have better things to think about than the dirty fighting of those who run this dirty social system.

In 1979 Mrs Thatcher came to power heralded as the saviour of British capitalism. She now quits the stage with British capitalism in economic decline. Far from realising her boast "to bury socialism", her political career has been buried by capitalism. (Socialist Standard, December 1990)

Posted by hallblithe at 7:04 pm