The main force in the socialist revolution is the working class. Capitalism brings into being and unites the working class in the work-place, and has taught them to struggle in a united way. Capitalism has brought into being the class which will finally end its system of exploitation and oppression - the grave diggers of the bourgeoisie. Despite false starts and setbacks, we remain convinced the working class will realise its revolutionary potential. This is in part because of the resounding failure of capitalism.

Socialists have struggled for many years over how to win the fight for communism. Since Marx first called for a society "from each according to ability, to each according to need" this vision has inspired hundreds of millions. It has been the driving force in history. But it has also raised the problem: how do we win? The effort to build a revolutionary movement capable of creating socialism while still working under the powerful grip of capitalism is clearly no small or simple task. Our Party was born out of the breakdown of the old Socialist Democratic Federation which made reform primary over revolution. We were compelled to explain its failure. Reform and revolution are a contradiction. Reforms are to improve capitalism; revolution is to end it. The two outlooks are in constant conflict. Despite individual improvements, we always remain wage-slaves, as long as there is the domination of capital. Reform movements exist to limit the aspirations of the working class to the crumbs they can get with the bosses in power. The essence of socialist revolution is the workers' destruction of the capitalists. This is absolutely incompatible with reform.

Therefore, the Socialist Party's role in every class struggle is to attack reformism. Our class has learned from bitter experience that there is no halfway or reform solution. The practice of palliatives has maintained the illusion of "good" and "bad" social reforms. There are no bosses. And there are no "good" reforms. Socialists stands in stark contrast to the capitalist cruel system. Without exception, no matter what the struggle, the only concern of the Socialist Party must be to build it around the ideas of socialism. We have raised aspects of socialist ideas in many battles over the years. We did good work in showing how racism leads to more profits for the bosses. We demonstrated that dividing the workers on race or nationality lines enables the bosses to rip-off one group of workers while robbing all workers. We expose and attack the capitalist myth that race is a biological category and that the nation-state is an invented entity. We attack the source for capitalism's racist and xenophobic oppression: the drive for maximum profits. We explain capitalism will end with a socialist, class-free society. If we don't make that idea the cornerstone of our work, we are not doing our job. We have the responsibility of pointing to capitalism as the source of inequality. We must explain that prejudice and discrimination can only be removed with socialist revolution and the abolition of wage labour. By making the reform struggle primary we obliterated the idea of eliminating the wage system. As the bosses squeeze the workers harder and harder every aspect of socialist ideas can come to the front. We decline to determine that mass ideas can only be reform ideas. Every worker can be a socialist. An egalitarian society can only be achieved with socialism. A "reform struggle" is a contradiction. The logic of demanding more from capitalism is reformism. It builds capitalist formations and ties the working class ideologically to the profit system. The logic of the struggle, in contrast, is the revolutionary fight to displace capitalism, which can never meet the aspirations of the workers for equality and power. The Socialist Party embodies the new socialist society in its ideas, its functioning, its being. We can't build our Socialist Party on the cheap. There is no easy way. We have to stick to our strategy for party-building: agitation and education. Our goal is not the goal of simply making life better, or making life under capitalism tolerable. 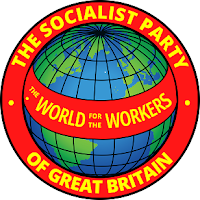 The small size of the Socialist Party and its lack of influence within the workers' movement may be important questions for some of our critics. However, possessing the correct knowledge is far more important to our members.
Posted by ajohnstone at 1:00 am