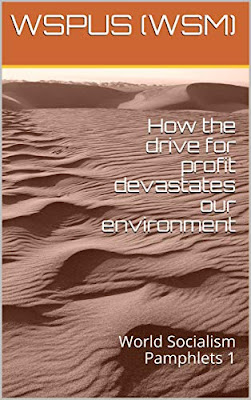 From the Alberta tar sands and the mutilated hills of West Virginia’s mining country to Australia's dying coral reefs, from the radioactive ruins of Fukushima and the seas clogged with plastic trash to the shrinking glaciers of the Andes and Himalayas, the devastation of our environment is plainly visible to all who have eyes to see. But how and why does this devastation occur? This pamphlet exposes some of the numerous links between devastation of our environment and the overwhelming drive for profit that animates the capitalist system. It brings together articles on environmental issues by members of the companion parties of the World Socialist Movement in the United States, Canada, and Britain. Following a brief introduction to the politics of the World Socialist Movement in Chapter 1, the articles that make up Chapter 2 focus on the looming peril of climate change. Other chapters discuss the emergence of new diseases, the despoliation of natural landscapes by real estate development, and the continuing massive pollution of the air, soil, and water by mining operations and the chemicals industry. Taken together, the material reveals the same forces at work throughout the world.This is the first in a new series of pamphlets planned for publication by the World Socialist Party of the United States, one of the organizations that make up the World Socialist Movement. 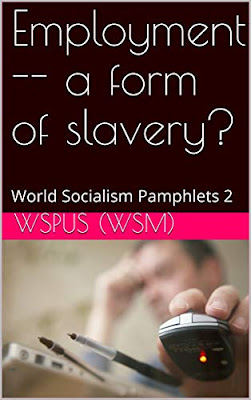 This pamphlet – the second in our new series – is about employment. That is, the relationship between employer and employee, boss and worker. Or, in collective terms, between the capitalist class and the working class. Employment is a basic and pervasive institution of our society. Most people take it for granted. Politicians never question its continued existence, nor do the mass media. Even so-called ‘communist’ regimes have never abolished it, merely replacing old bosses – private capitalists and their representatives – by new ones – state-appointed directors and officials. In our heart of hearts we – employees – hate employment. We hate being at the beck and call of a boss. After all, the word ‘employ’ means ‘use’ – to employ a tool means to use it. An employee is a person used as a tool by another person – his or her employer or user. Why is it that we beg to be someone’s tool? We enter into this humiliating arrangement only because the sole practical alternative – being unemployed, i.e., unused – seems even worse. We are driven to seek employment in order to obtain a livelihood. It is slavery all the same. Not full-time or chattel slavery, where whole human beings are property, but part-time slavery – what socialists call wage slavery. That is one of the main reasons why socialists look forward to a new society without employment – a society in which the class division into employers and employees, capitalist class and working class, has been overcome – the society that Marx called a ‘free association of producers.’ Chapter 2 aims to clarify the concept of ‘wage slavery’ by analyzing the similarities and differences between wage slavery and chattel slavery. Chapter 3 presents a few short pieces in which socialists express their attitude toward employment and the basic division in society between employers and employees. Chapter 4 looks at a crucial aspect of employment – working hours and their tendency to rise in recent decades. Chapter 5 discusses the physical dangers that employment often entails. Chapters 6 and 7 look back a century to an earlier period in labor history – the first part of the 20th century. Chapter 6 is devoted to the memory of two notable figures from that period – trade union organizers and socialists Eugene V. Debs and Joe Hill. Chapter 7 recalls the Ludlow Massacre of 1914 – part of the violent response of the Colorado coal bosses to the attempts of their wage slaves to improve their miserable working and living conditions. Most of this pamphlet focuses on the United States and (to a lesser extent) Western Europe and Canada. Chapter 8 glances at a few other parts of the world and describes what some workers, poor farmers, and landless people do to survive in three countries: Malawi (East Africa), Kyrgyzstan (post-Soviet Central Asia), and Indonesia (Southeast Asia).

I love the work you guys do, but couldn't you fond a better platform than Amazon to sell your pamphlets in light of the way they treat their workforce

I agree. I have stopped buying from them.