What about everyone else? In that same period, the average wealth of the bottom 99 percent declined by $4,500.

This is according to an analysis put out Wednesday by Matt Bruenig of the People's Policy Project, based on data from the Federal Reserve's Survey of Consumer Finances.

Tax analyst Hunter Blair of the Economic Policy Institute noted on Wednesday, the top one percent of households would on average see a $32,500 tax cut per year under the GOP plan. The bottom 20 percent of earners, by contrast, would pay $10 more annually.

At Bloomberg on Wednesday, Toluse Olorunnipa reported that executives at Coca-Cola, Pfizer, Amgen, and Cisco have all said in recent weeks that their companies will prioritize increasing dividends or buying back shares from shareholders, before investing their savings in the company by hiring more workers or giving employees raises.

At a speech to the Wall Street Journal CEO Council by Trump’s top economic adviser, Gary Cohn, the moderator asked business leaders in the audience for a show of hands if they planned to reinvest tax cut proceeds. Few people responded. "Why aren't the other hands up?" Cohn asked. Vice President Mike Pence, reportedly told the business leaders, "We need all of you to tell this story" of corporate tax cuts leading to higher wages and more jobs for working Americans. Groups including Americans for Tax Fairness, the Tax Policy Center, and the Center on Budget and Policy Priorities, have all found that the notion of long-term, meaningful benefits for the middle- and lower-classes is indeed just a story.

While corporations' taxes are immediately and permanently cut from 35 percent to 20 percent under the GOP plan, middle-class Americans will owe more in taxes by 2027, even if they see some relief in 2018.  Taxpayers making up to $30,000 will see their tax burden increase by 2019. By 2021, that extends to those making $40,000 and under.


America’s only levy on grand concentrations of private wealth is the federal estate tax. You need to be ultra-wealthy in America today — have a net worth over $11 million — to be subject to the federal estate tax. Only two out of every thousand Americans reach that level of wealth. Only the largest 0.2 percent estates face the tax; the other 99.8 percent face no estate tax at all.


Doubling the exemption would eliminate the estate tax for estates worth between $11 million and $22 million per couple, and would give estates worth over $22 million per couple (all those left facing the tax) a tax cut of $4.4 million apiece — 40 percent of the additional $11 million in assets that would be exempt. That’s because the 40 percent statutory estate tax rate applies only to amounts above the exemption level.

Forrest Mars Jr. had a $25-billion fortune when he died in July 2016. But the Mars family has apparently been able to avoid estate tax on that entire $25 billion. If Forrest’s fortune had been subject to a significant estate tax after he passed on, the collective wealth of his four daughters in 2017 would be substantially less than that $25 billion. Forbes puts the wealth of each of Forest’s four daughters at $6.3 billion, for a total of $25.2 billion. That’s almost identical. As Mars family history makes painfully clear, tax avoidance vehicles available under current law allow even billionaires to zero out their estate tax. 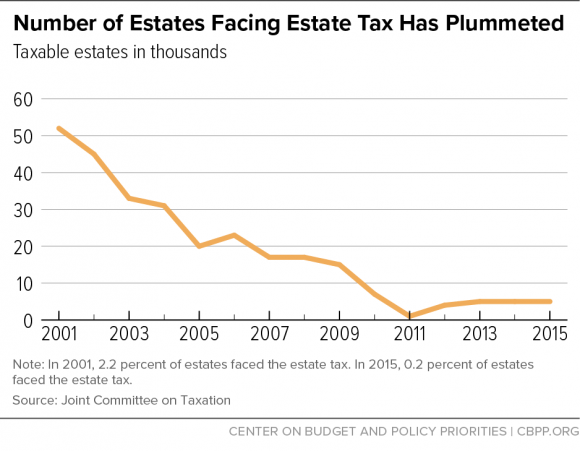 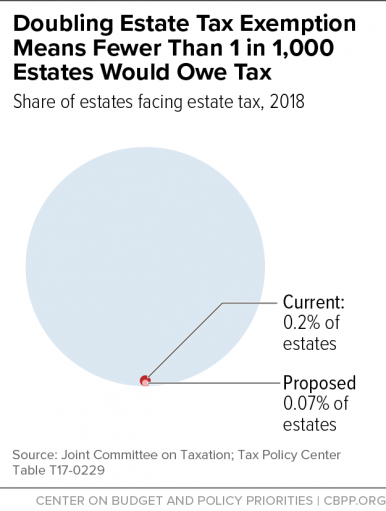