Imagine being without a union 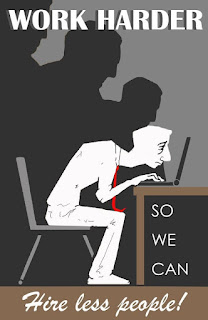 Imagine being without unions. This shouldn’t be hard in America where unions are already disappearing and battling for their lives. In the early 1950s, one out of three American workers belonged to them, four out of ten in the private sector. Today, only 11.8 percent of American workers are union members; in the private sector, just 6.9 percent. Unions have no presence in booming sectors of the economy, in high-tech, fashion, and finance. Where are unions in the new economy? Can a union do anything for a temp? A part-timer? A software writer? A barista? Will anyone even notice if unions cease to be?

The vanishing act varies by region—in the South, it’s almost total—but proceeds relentlessly everywhere. Since 1983, the number of states in which at least 10 percent of private-sector workers have union contracts has shrunk from 42 to 8. Republican governors and legislatures in the industrial Midwest, long a union stronghold, moved to reduce labor’s influence. Labor was the chief source of funding and volunteers for their Democratic opponents, and working-class whites, who still constitute a sizable share of the electorate in their states, were far more likely to vote Democratic if they belonged to a union. The fiscal crisis of the states provided the pretext for Republicans to try to take out their foremost adversaries, public-employee unions.

Indiana’s Governor Mitch Daniels signed a “right to work” law giving nonunion members who enjoyed the benefits of a union contract the right to withhold dues to the union, making Indiana the first Midwestern state to pass such legislation. In Ohio, Governor John Kasich signed a bill repealing collective-bargaining rights for all public employees, but voters overturned that law at the polls. In Wisconsin, which had been the first state to extend those rights to public-sector workers, Governor Scott Walker repealed those rights, but more selectively than Kasich: He kept them for police and firefighters. When outraged unionists and their allies mounted a recall campaign against him, Walker beat them back handily. In the nation’s capital, Republican senators and congressmen refused to confirm President Barack Obama’s appointees to the National Labor Relations Board, which adjudicates labor-management relations in the private sector.

Losing jobs as technology transformed workplaces and suffering wages cuts as globalization transformed the economy unlike the 1930s, when workers flocked to unions, the current recession has only intensified labor’s downward spiral. In 2001, 32 percent of the revenues of the S&P 500 came from abroad. By 2008, that figure had risen to 48 percent, as the rapidly growing middle classes of nations like China and Brazil began purchasing more. With rising markets abroad, U.S. businesses can afford to be less concerned with maintaining the purchasing power of American consumers—which means the wages of American workers.

Here’s what happens if unions vanish

Ordinary Americans lose their right to bargain collectively for their pay and benefits.

Even those who have never bargained collectively will feel the loss. Some years ago, when unions were big enough that their effect on the larger economy could be measured, Princeton economist Henry Farber concluded that the wages of nonunion workers in industries that were 25 percent unionized were 7.5 percent higher than they’d be if their industry were union-free. When unionized companies were common, firms that were nonunion had to mimic the wages and benefits of their unionized counterparts for fear that their employees would leave or, worse, organize. That was certainly the practice at General Electric and other largely nonunion giants.

Nonetheless, union workers generally maintained a 20 percent wage advantage over nonunion workers. The key to the wage advantage is the percentage of union membership in a given industry or market. In cities where nearly all the class-A hotels are unionized, as they are in New York and San Francisco, housekeepers make more than $20 an hour. In cities where roughly half of such hotels are unionized, such as Los Angeles, their hourly wage is about $15. In cities where all the hotels are nonunion, such as Phoenix, housekeepers make little more than the minimum wage, if that.

We look back now at the three decades of broadly shared prosperity that followed World War II as a time of union-management concord, when executives made their peace with unions and unions didn’t rock the boat. In fact, more strikes occurred from the late 1940s through the early 1970s than before or since. When union contracts expired, workers and managers fought pitched battles over the terms of the next contract. The largest strike in American history came in 1959 when 500,000 steelworkers stayed off the job for 116 days. Workers compelled management to let them share in their company’s proceeds. But as density declined, unions’ ability to win strikes declined with it. By the late 1970s and early 1980s, unions were striking less to win raises than to resist management proposals to freeze wages and cut benefits. The weaker unions grew, the fewer their strikes. In the early 1950s, there were roughly 350 strikes in the United States every year. Over the past decade, there have been roughly 10 to 20 per year.

As unions shrank, inequality grew. From 1947 through 1972, productivity in the United States rose by 102 percent, and median household income rose by an identical 102 percent. In recent decades, as economists Robert Gordon and Ian Dew-Becker have shown, all productivity gains have accrued to the wealthiest 10 percent. In 1955, near the apogee of union strength, the wealthiest 10 percent received 33 percent of the nation’s personal income. In 2007, they received 50 percent.

Profits have been growing at wages’ expense. Michael Cembalest, J.P. Morgan’s chief investment officer, has calculated that reductions in wages and benefits were responsible for about 75 percent of the increase in corporate profits between 2000 and 2007. Today, wages and benefits make up the lowest share of America’s gross domestic product since World War II. Wages have fallen from 53 percent of GDP in 1970 to 44 percent today.

According to a Wall Street Journal survey of the S&P 500, the nation’s largest publicly traded companies, revenues per worker, which were $378,000 in 2007, grew to $420,000 in 2010. Businesses now produce more with fewer employees, but even those workers who’ve kept their jobs haven’t seen their wages rise.

In the years since 1979 the share of American workers with college degrees has increased from 19.7 percent to 34.3 percent, according to a new study by John Schmitt and Janelle Jones at the Center for Economic and Policy Research. Even so, the percentage of college graduates with good jobs, which Schmitt and Jones define as jobs paying at least $37,000 a year that provide health insurance and any kind of retirement plan, has fallen from 43 percent in 1979 to 41 percent in 2010.

So workers are better educated and more productive. What they lack is power.

While veteran workers in unionized plants still make $26 to $32 an hour, new hires in companies like General Motors and Caterpillar make between $12 and $19 hourly, with contracts that lock them into these lower levels no matter how long they may work there. In 2008, average hourly wage and benefit costs in the Midwest were $7 higher than they were in the South; by 2011, they were only $3.34 higher. Apart for the wealthiest 10 percent, the entire nation is downwardly mobile. The share of jobs at the bottom of the economy is growing as the jobs with middle-income wages vanish. The United States now has the highest percentage of low-wage workers—that is, workers who make less than two-thirds of the median wage—of any developed nation. Fully 25 percent of all American workers make no more than $17,576 a year.

Globalization accounts for only a portion of labor’s descent in the U.S. Five years ago, economist Alan Blinder, a former vice chair of the Federal Reserve, calculated that roughly 30 million to 40 million American jobs could be offshored. People can make iPhones and blueprints and write contracts anywhere. Although most of those jobs wouldn’t be offshored, Blinder argued, anyone with such a job would sooner or later see his wages held down. This still leaves more than 100 million American jobs that can’t be shipped abroad, whose wages can’t be undercut by the going rate in Shenzhen or Mumbai. Carpenters, cooks, supermarket clerks, and truckers have jobs that can’t be relocated. Yet unions have lost members in these place-specific sectors as well. In 1973, 40 percent of construction workers were union members. In 2004, just 15 percent were. Globalization by itself doesn’t necessarily lead to a weakened labor movement and declining worker income. If it did, unionized German manufacturing workers would not enjoy pay and benefits that exceed those of Americans even as their country has become the export giant of the Western world. What drove this decline wasn’t offshore competition. It was growing employer opposition to unions, which was also the primary reason why unions could not expand into the growing service sector. Beginning in the 1970s, American businesses realized they could defeat unionization campaigns by exploiting the weaknesses of the National Labor Relations Act (NLRA), the 1935 law designed to protect workers’ right to organize, or by violating the act altogether, since the penalties for such violations were minuscule. Harvard professor, Richard Freeman, has found that in 1950, for every 200 workers who voted to join a union, only one was fired during the organizing drive. By the early 1990s, that figure had grown to nine. American businesses had figured out that illegally firing workers to deter their unionization might be the single greatest deal they’d ever find.

One way Wal-Mart, its suppliers, and many other companies lower those wages is to hire workers not as employees but as independent contractors and temps. Businesses thereby evade any obligation to provide workers with benefits and make it still more difficult for unions to organize. How do you unionize workers who aren’t employees of the company you’re organizing? Such employment relations aren’t generally covered by the labor relations act, and such employment arrangements are increasing. By most estimates, roughly 25 percent of all American workers fall into this contingent--worker category. In many cases, this is an employer ruse. FedEx, for instance, dictates the schedules, routes, pay rates, and conditions of work for its drivers but calls them independent contractors to thwart any attempts to unionize them. Beginning in 1965, every time there was a Democrat in the White House and a heavily Democratic Congress on Capitol Hill, labor endeavored to have the law amended so workers could join unions without fear of being fired. Efforts to change the law during the Johnson, Carter, and Clinton presidencies all came up short. with Barack Obama in the White House and Democrats in control of the Hill—victories to which labor had contributed about $400 million and the efforts of hundreds of thousands of volunteers—unions tried again. Once more, the effort died in the Senate. “We didn’t move a single Democrat who wasn’t already with labor to move on our behalf,” says Andy Stern, SEIU president 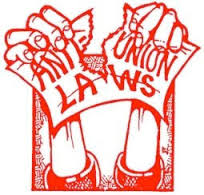 That’s what the disappearance of unions and the loss of worker bargaining power means to workers.

Larry Cohen, the president of the Communications Workers of America (CWA) argues that f labor wants to win more rights for workers it must first break the stranglehold that big money and conservatives have on our politics by winning campaign--finance reform, abolishing the Senate’s supermajority requirements, outlawing voter suppression, and legalizing undocumented immigrants. He believes American unions can learn from the successes that labor has experienced in other nations when they helped form broader social movements. In recent decades, he points out, unions in Brazil, South Korea, and South Africa have flourished by becoming linchpins in campaigns for democracy, much as European unions did 100 years ago.

Taken from an article by Harold Meyerson at Alternet website
Posted by ajohnstone at 9:00 pm