The US White Rich 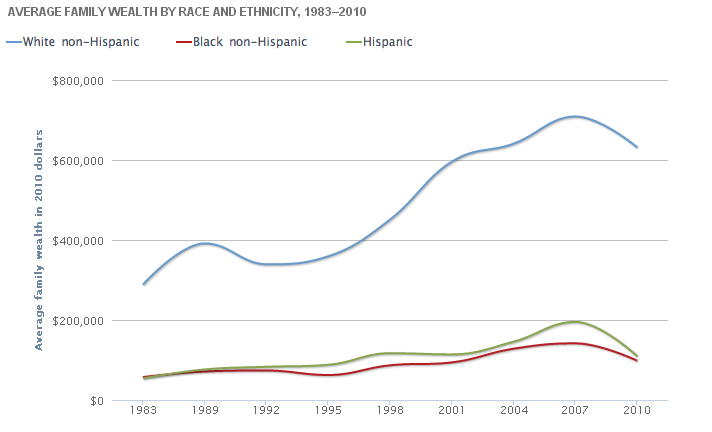 All but three of America's 185 wealthiest families have one thing in common. They're white. Yes, all of them. The three families of color listed are of Taiwanese, Iranian and Hispanic descent.

Despite steadily rising income levels over the past half century, black families remain just as poor relative to whites as they were in the 1960s. But the New York Times reports that the wealth gap is even "more pernicious" than the income gap because it persists across generations and puts young people of color in an especially disadvantaged position for building future wealth. 2009 saw the most lopsided racial wealth ratios since the government started compiling data in the mid-1980s. That year, white median household wealth stood at 19 times that of black families and 15 times that of Hispanics. The Great Recession also had a disproportionate impact on minority holdings: Hispanic median household wealth fell 66% between 2005 and 2009, compared to a 53% fall for black households and just 16% for white households.

Why? A variety of factors contribute to the tenuous nature of minority assets: For one, housing effects account for 49% of black wealth compared to 28% of white wealth — a double-edged sword considering that black-owned homes appreciate in value at much lower rates than white-owned homes. This is largely due to residential segregation, which artificially lowers demand and places a "forced ceiling on home equity for African-Americans who own homes in non-white neighborhoods." Not to mention that wealth built on home ownership is especially vulnerable during housing crises, like the one that took hold during the recession.

Put simply, this wealth gap has defined American economics for many years, and is rooted in the same racial inequalities that helped impoverish minority families to begin with.

Meanwhile, the white rich get richer: The Waltons of Walmart top the Forbes list with a cumulative $152 billion in assets. The Kochs, Mars', Cargill-MacMillans and (Edward) Johnsons round out the top five, with the Hearst family coming in sixth with a net worth of $35 billion.

All told, the 185 families listed, from the two Newhouse brothers to the 255-member Haas clan, control a combined $1.2 trillion: roughly equal to the GDP of the state of New York.
Posted by ajohnstone at 1:19 am