The Pillage of Africa 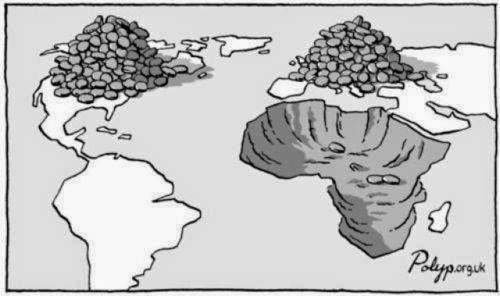 Figures expose the true financial relationship of wealthy countries with Africa, a relationship that is seldom mentioned by politicians. It is a relationship in which the world doesn't aid Africa, but in which Africa aids the world. Africa is not poor, though its people are being kept in poverty by a combination of inequitable policies, huge disparities in power, and criminal activities perpetuated and sustained by wealthy elites, both inside and outside the continent.  Of the world’s poorest one billion people, one-third live in resource rich countries. Resource-rich countries account for 9 out of the 12 countries at the bottom of the Human Development Index, a measure of wealth, life expectancy and education

There is a nice story that governments of wealthy countries like to tell about the rich world’s relationship with Africa. It is a story of generosity, charity and benevolence. It is a story of selfless aid givers supporting the needy and impoverished people of Africa. While this is the story that governments like to tell, it is all a lie. Politicians have lined up to accept the accolades of the nation’s ‘proud record’ as a donor and the charity sector responds by applauding the aid budget – and in so doing has reinforced this aid-based perception. Despite years of ‘generosity’, the end of global poverty is still nowhere in sight.  Rather than tackling poverty, this false narrative has instead helped to reinforce paternalistic notions of Africa as a poor and corrupt continent, with helpless people in need of intervention from wealthy countries. The narrative ignores the fact that the rich are in fact stealing more than they give.

Research  reveals that Africa loses almost six and a half times the amount of money that it receives in aid. The continent receives $30 billion in aid a year, this figure pales in comparison to the $192 billion leaving the continent via illicit financial flows, the repatriation of multinational company profits, debt repayments, loss of skilled workers, illegal logging and fishing, and the costs imposed as a result of climate change.

Under the disguise of giving aid or charity, western governments and multinational corporations are pillaging states in sub-Sahara Africa with losses nearing $60 billion each year. When these losses are compared to overall financial inflows – including not just aid but foreign investment and remittances − Africa is left with a $58 billion a year net loss. To put it in to context, that is over one and a half times the estimated $37 billion a year extra funding it would cost to deliver universal health coverage for everyone in the world.

In fact, this aid obsession merely acts as a smokescreen that hides the true causes of global poverty and reinforces paternalistic notions of Africa as a poor and corrupt continent with helpless people in need of intervention from wealthy countries. It is a smokescreen that hides the fact that these wealthy governments often have a large role in causing the conditions that their ‘aid’ is supposed to help fix. Companies are allowed to promote their ‘corporate social responsibility’ whilst routing profits though tax havens; wealthy philanthropists donate money whilst their companies dodge tax; and short-term fundraising tactics mean NGOs push the idea that donating a few pounds to charity will solve poverty whilst simultaneously ignoring the systemic injustices that keep Africa poor. Wealthy governments celebrate their ‘generosity, while continuing to be party to the sustained looting of Africa – increasing inequality and creating the very poverty they profess to be solving through aid.

$35.3 billion a year is lost in illicit financial flows facilitated by the global network of tax havens. Tax havens jurisdictionally linked to the G8 countries or the EU are responsible for 70% of global tax haven investment, and the UK is at the heart of this with at least ten tax havens under its jurisdiction, or 11 if you count the City of London.The UK, with its web of tax havens, is at the centre of this theft from the continent. Yet this truth is rarely told.  Martin Drewry, director of Health Poverty Action explains "It’s sustained looting – the opposite of generous giving – and we should recognize that the City of London is at the heart of the global financial system that facilitates this.”

According to the report over the next 10 years the African people will lose $580 billion.

From here
Posted by ajohnstone at 3:13 am