The Fear of Marx 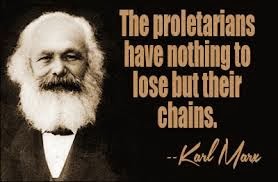 Among some, charges of racism are leveled against any who criticise the black president of the USA in the same way that charges of anti-semitism are used against anyone who is critical of Israel’s Zionist polices (This is not to deny the racism is directed against Obama.) Our opposition  has nothing to do with race. It stems from class differences. To call Obama a liberal or a socialist, as many  do, is farcical and incredulous.

Barack Obama identifies allies himself with America’s ruling class. Whatever minutia one uses to differentiate the lesser and greater evil is akin to splitting hairs. The Democratic Party and the Republican Party are not mortal enemies, as portrayed in the corporate media; they are in collusion against the world’s working class and the poor. Together, they are raping and pillaging the Earth and repressing workers through economic austerity.

Despite the historical evidence, most people continue to associate democracy with capitalism. Let us be clear: Democracy is the antithesis of capitalism. When the richest and most powerful people on earth, the primary beneficiaries of capitalism, invest so many resources into demonizing and subverting the writings of one man—Karl Marx—and the various economic and philosophic alternatives to capitalism, inquisitive minds want to know why. Marxism makes the ruling elite quake in their shoes.

The key point to understand is that capitalism, a system based upon the ruthless exploitation and commodification of workers and the relentless rape of our planet, stifles and represses democracy. Capitalists abhor all forms of egalitarianism. Marx embraced them. The mere possibility of an empowered work force troubles the capitalist’s sleep, as did the possibility of slave rebellion, albeit it small, distress the slaveholder.

Working people are conditioned to reflexively recoil against ideas they do not understand. They are psychologically programmed to detest that which could potentially set them free. Workers are led to believe that economic servitude and wage slavery is freedom. Consider the vitriollevied against the alternative to capitalism. What is their source? Who but wealthy capitalists fund the propaganda apparatus? Why do we raise classrooms of puppets rather than critical thinkers and political dissidents? To the detriment of us all, freethinking and critical analysis are discouraged and often reprimanded in academia and elsewhere. And thus millions of human beings are transformed into sheep that are led to slaughter in the military and the world’s sweat shops.  It is all done for the benefit of capitalists at the expense of society.

It is by these means that capitalism survives. Despite the weight of history, workers still believe in myths and fairy tales. They have misplaced hope and faith in phony leaders and bogus institutions that keep us servile and docile. Irrational faith requires nothing from us. Delusion has become the norm because too many of us are incapable of grappling with reality. We can and must do better than capitalism or we are doomed.

Adapted from an original article by Charles Sullivan

Posted by ajohnstone at 3:29 am

"Fear of the Marx" is my favorite Iron Maiden Song...