The Real Trickle Down 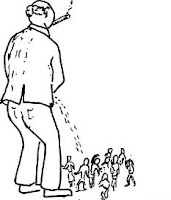 Nobel Prize-winning economist Joseph Stiglitz said another 2 million foreclosures are expected in the U.S. this year, adding to the 7 million that have occurred since the economic crisis of 2008. About 15.7 million homeowners had negative equity at the end of the year, up from 13.9 million in the previous three months.

“Americans today are worse off than they were 10 to 12 years ago,” Stiglitz said. At the same time, the U.S. faces “increasing inequality”, with the “upper 1 percent controlling 40 percent of wealth. Instead of trickle down, it has trickled up.”
Posted by ajohnstone at 6:33 am