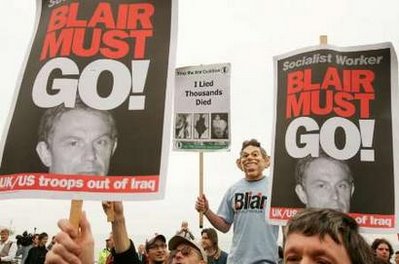 Blair said it. Now Brown has repeated it.

In his notorious militarist speech of 12, January before an audience of trained killers aboardthe warship HMS Albion, Blair compared Islamic terrorism to "revolutionary communism in its early and most militant phase", and said it should be dealt with in the same way.

In his pre-prime-ministerial tour of India Brown declared that "Islamic extremism had to be fought at all levels, 'just as we learnt we had to fight communism at all levels'" (Times, 19 January).

What can they have in mind? Of course by "communism" they don't mean communism in the proper sense (which is just another name for what we call socialism), even if, as faithful servitors of UK Capitalism PLC, they are just as much opposed to this. What they meant was the ideology under which state-capitalist Russia and China sought to challenge the world hegemony of the Western capitalist powers.

And just how was "Leninist state capitalism" (to give it its proper name) combatted? During the Cold War period it was by building up military might and confronting Russia and China militarily whenever they sought to expand their spheres of influence. Hence, the Malayan War, the Korean War, the Vietnam War. It also involved destabilising regimes that were seen as actually or potentially pro-Russia, as in Cuba, Nicaragua, Angola and Afghanistan (where Islamic extremists were paid to do the job).

And there was an ideological battle too. Universities were endowed and literary figures bribed to rubbish not just Lenin but Marx too, falsely portrayed as a forerunner of Russian and Chinese state capitalism. Then the so-called "Communist" parties were infiltrated and files kept on anyone talking of capitalism and socialism (including no doubt us).

In referring to "revolutionary communism in its early and most militant phase", Blair is going back even further -- to the period before Lenin's death when the Bolshevik regime still hoped to be saved by the world revolution Lenin had mistakenly thought was on the cards. The one good thing that the Bolsheviks did was to try to stop the slaughter on the Eastern Front in WWI by taking Russia out of the war. How did the Western powers react? By themselves invading Russia.

In 1924 the British secret service even helped to topple the first Labour government -- even though it had demonstrated its commitment to the defence of the British Empire -- by forging the notorious "Zinoviev Letter" and putting it in to circulation just before the 1925 General Election.

So, what Blair and Brown are in effect proposing is to maintain and build up Britain's armed forces, to send them to do battle whenever needed, to bribe "moderate Muslims", and to generally employ dirty tricks in a bid to beat off the latest challenge to the world hegemony (and oil supplies) of the Western capitalist powers. To such an extent have they assimilated themselves to the job of running a capitalist state and furthering the interest of its capitalist class.

While in India, Brown revealed that he can be just as hypocritical as Blair. He was photographed laying a wreath in memory of Gandhi. As he could himself see the contradiction between advocating the build-up and use of armed forces and Gandhi's reputation as an apostle of non-violence, he explained that it was not Gandhi's non-violence that inspired him but the way he dealt with the challenge he faced (as if he didn't do so non-violently). What a hypocrite! But this is only par for the course from the canting Christian that he is. In any event, he only did it to curry favour with the Indian government to try to get contracts for British capitalist firms to make a profit by selling their goods in India.

"Blair Must Go!" proclaims the current SWP poster given away free on demonstrations. No doubt they are already preparing new ones saying "Brown Must Go!" just as before they had "Major Must Go!" and "Thatcher Must Go!". Meanwhile, as we know that prime ministers come and go but it makes no difference as they're not the cause of the problem but the capitalist system of competitive struggle for profits is, we offer the only logical socialist slogan: CAPITALISM MUST GO!.

finding part-timers who pretend they're socialists, but would rather sit around talking and playing power games said...

so true. its like everyone demonising bush and blair. even though they are both war criminals getting rid of them would not really change anything; the ruling class would just fiond more eager lap-dogs to do its bidding.
what we need is a change in the mode of production; from production for profit to production for use, and an end to 'leaders' and true participatory, accountable democracy