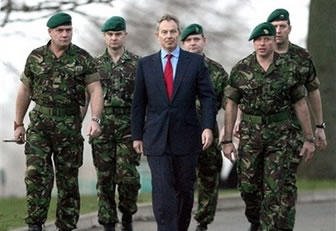 Former Labour Cabinet Minister, Claire Short, describes Tony Blair as"delusional". We don't know about that, but he does seem to think that he too, like his buddy George Bush, is the commander in chief of his country's armed forces.
Last Friday he was televised making a speech on board a warship in the Plymouth naval base surrounded by khaki-clad soldiers and camouflaged armoured cars. Exactly the sort of background Bush chooses to make his pro-war pronouncements, but he has an excuse in that, constitutionally, he is the commander-in-chief. Blair is just the Queen's first minister.
Blair told the assembled military personnel that he wanted them and the rest of Britain's armed forces to be "warfighters" and not mere"peacekeepers" and pledged, to prepare for the future wars he foresees, "increased expenditure on equipment, personnel and the conditions of ourarmed forces".
It was an extraordinary display of gung-ho militarism from the head of a Labour government whose first Foreign Secretary declared that Labour, unlike the Tories, would pursue "an ethical foreign policy" and from thel eader of a party that once used to pride itself on being the peace party. But, given world capitalism, his argument has a ruthless logic.
Blair drew a distinction between "hard power" (military might) and "softpower" (diplomacy) and argued that if Britain "retreated" into maintaining its armed forces merely for peace keeping then "inexorably" its "softpower" would be weakened too. According to the Financial Times (12 January), he said that "the main risk for the future was not gung-hol eaders too keen to embark on military adventure - but those who concluded that military engagement was too difficult and thereby fall into a passivedis engagement"; in which case "the result would be 'Britain's reach, effect and influence qualitatively reduced'".
It's an argument that can't be faulted. Capitalism is a world-wide system involving a competitive struggle for profits in which all states vie with each other to influence the course of events in favour of profit-seeking enterprises from within their borders. Normally this takes the form of diplomatic initiatives and manoeuvrings but the weight other states attach to these depends on whether they think the state in question has the means- and the determination - to back them up.
The means can be - still in the realm of Blair's "soft power" - economic retaliation or sabre-rattling, but to be credible a state must ultimatelybe prepared to do more than merely have big sabres or just rattle them. Blair's model, Mrs Thatcher, understood this well (even if at the time he himself didn't, sporting as he then did a CND badge). Which is why when third-rate power Argentina took over the Falkland Islands she sent out the"task force" to recover them. If she hadn't, Britain's credibility and standing in the international pecking order would have gone down.
So Blair is right. Without armed forces trained and equipped for "warfighting" (and killing and dying) beyond its frontiers, Britain's "reach, effect and influence" to further the interests of its capitalist class in the international arena will be weakened. The terrifying fact is that it is not him who is deluding himself (at least not on this point) but those who believe that an ethical foreign policy is possible. The internationa lstate-system that world capitalism has engendered is not one where there are any rules. It's every state for itself, no favours given and woe to the weak. If Britain's rivals on the world stage thought that its government had moral scruples about going all the way in employing its armed forces they would give less weight to its diplomatic initiatives indefence of its capitalist class.
So, what are we to conclude? By all means let those who want a worldwithout war denounce every war that takes place but without the illusion that we can get states within capitalism to renounce war as a policyoption. This will never happen as it goes against the whole logic of the capitalist state-system. Once again, it is quite literally true that world-wide socialism is the only framework within which a lasting peace can exist. Let us, therefore, work for it as the priority of priorities.
ALB

finding part-timers who pretend they're socialists, but would rather sit around talking and playing power games said...

maybe now blair is going (and the SWP with their blair must go slogan must expect something very important to have occured if it was worth spreading the word that blair must go on their banners) maybe he is looking ahead to pastures new.
maybe he's the future secrectary-general of NATO,in his half-delusional fevered imagination and his egocentrical sense of self-importance this could be a probable fantasy of blairs

Chinese leader Hu Jintao made the same sort of speech a couple of weeks earlier. According to Reuters (27 December):
"Chinese president and commander-in-chief Hu Jintao urged the building of a powerful navy that is prepared 'at any time' for military struggle, state media reported on Thursday. . .
'We should make sound preparations for military struggles and ensure that the forces can effectively carry out missions at any time,' said Hu, pictured in green military garb for the occasion . . .
Analysts say China sees a stronger navy as a way to secure energy supplies and seaborne trade routes to help ease security fears over supplies of resources and oil it needs to feed its booming economy".
Looks like Blair's "warfighters" might get a chance to fight against other than local militias and mountain tribesmen.