Chris Packham presented a BBC Horizon documentary 7.7 Billion People and Counting on the consequences of the rise in population. Packham is a patron of the controversial charity Population Matters. He concedes that “We’re so good at saving lives.”

About a quarter of schools in southwest Scotland are operating at less than 50 per cent capacity, figures have revealed. School rolls are falling in Dumfries and Galloway, which has experienced one of the highest rates of population decline in Scotland. A report to the council’s education and learning committee showed that about 6,000 more people died in the region than were born in the decade to 2018, causing the population to fall by 1.5 per cent.

Populations are already falling in many countries. Not since the Black Death and the great plagues of the Middle Ages have we seen population collapses of this magnitude. In rich countries, fertility rates have hovered below replacement levels of 2.1 children per woman for decades, but they are now below that threshold in middle-income countries across the world, from Iran to Thailand to Brazil. In South Korea, the fertility rate dipped to just 0.98 last year, and even in the US it hit an all-time low of 1.73 births per woman.Given parental desire to invest in each child, a fertility surge in rich countries is improbable. According to the latest World Population Prospects from the UN, 27 countries have fewer people now than in 2010, and it expects 55 nations — including China — to experience declines between now and 2050. In the 21st century, falling populations will become normal.

Bulgaria’s population was around 9 million at the end of the 1980s, but it fell to fewer than 7 million in 2018, and is expected to fall below 6 million in 50 years. The UN Population Division projects that Bulgaria will lose 23% of its population by 2050 – a projection so high that the country is neck-and-neck with Lithuania for the fastest shrinking population in the world. What sets Bulgaria apart from other declining European countries is its massive outbound migration. As many as 1.1 million Bulgarians estimated to live abroad a

Italy's birth rate has fallen to 1.32 children per women, far below the 2.1 children needed to maintain a stable population over time

Hungary will be providing free IVF to couples to combat the country's declining birth rate. Xenophobe Viktor Orban recently announced that women who bear four or more children will never have to pay income tax again, while newly married couples are eligible for a loan which will be written off if they have three children. Hungary’s population is expected to drop from 9.8 million to 8.3 million by 2050. Emigration has removed around one million people between 2008 and 2018, according to the OSCE,


Thailand's latest population projections show the country is poised to undergo a shift that could soon create a worker shortage. The country is ageing at one of the fastest rates in the developing world.The forecast suggests Thailand's population will continue to increase until 2028, before starting to decline.Jinanggoon Rojananan, deputy secretary general of the National Economic and Social Development Council said: "Fewer children are being born, and the fertility rate is consistently declining. In studying different countries, we haven't seen any successful method to boost the birth rate, yet." In just 20 years, senior citizens are expected to make up about one-third of Thailand's population. At the same time, the working-age population will decrease from 65 percent to 56 percent. That statistic is raising concerns about the future of Thailand's manufacturing industry."In the near future, we need to improve production methods by adopting new technologies and innovations," Jinanggoon said. "That's the only way to boost the national income level enough to support the population."
Japan doesn't have enough babies and young workers to keep up its tax income and finances. From 2017 to 2050, the fourteen-and-under age cohort is forecast to fall by nearly 40 percent. The workforce (15–65) falls by 34 percent in the same period. Thus, not only is Japan’s population declining, its workforce is declining much faster than the population as a whole. After peaking in 2010 at 128 million, the country’s population has eased back to 126 million and will continue to decline. Its population is set to shrink by 0.4 percent annually, with the decrease expected to accelerate to 1.0 percent annually by the 2040s. By 2050, Japan will have 23 percent fewer citizens. Nor does it stop in mid-century. Demographers see current trends persisting to the end of the century, when Japan’s population falls to fifty million, only 40 percent of its all time high.
“Croatia suffers a population loss equivalent to losing a small city every year,” prime minister Andrej Plenkovic said. Croatia – which has a population of just 4.2 million – since it joined the EU. The World Bank projects the population to decline to 3.46 million by 2050. The EU estimates that 15 per cent of working-age Croats live in other EU countries, the second-highest such percentage in the union after Romania. The birth rate at 1.44 children per woman is 10 per cent below the EU average and close to one-third less than the natural replacement rate of 2.1 that countries need to hold their populations stable. Croatia is not alone in the Balkans to face such a population decline.

On current projections, by 2050. Serbia 23.8 per cent fewer;  and Romania 30.1 per cent. Serbia has tried to provide cash benefits for each child, with an increasing scale for up to four children.

Some 14.65 million babies were born in China last year, down from 15.23 million in 2018, and the lowest number since 1961, according to data from the National Bureau of Statistics (NBS) released on Friday. The birth rate fell to 10.48 per thousand, the lowest level since at least 1949. Fertility rates dropped from 5.9 births per woman in 1970 to about 1.6 in the late 1990s. The replacement level for a population is 2.1.To avoid a demographic crisis, the government relaxed its one-child policy in 2016 to allow people to have two children, but the change has not resulted in an increase in pregnancies. The workforce is expected to decline by as much as 23 per cent by 2050. "The demographic problem is a slow, long-term one," He said. US-based academic Yi Fuxian, senior scientist at the University of Wisconsin-Madison, believes that China's population is over-estimated, and according to his work, the real population "began to decline in 2018"
By the end of 2018, the number of people aged above 60 had reached 249 million, more than 17 percent of the total population. And a country with more than 10 percent of its population above 60 is already labeled as an aging society. The population above 60 is widely expected to increase to 255 million in 2020.
India’s population has indeed reached 1.37 billion, according to the recently released United Nations World Population Prospects, and it will continue to increase over upcoming decades, even if all Indian families choose to have just two children, because of the sheer numbers of the population entering into the reproductive ages. However, we must recognise India’s significant declines in fertility.
Its total fertility rate (TFR), the average number of children that would be born to a woman over her lifetime, is 2.2 and has reached replacement level (2.1), that is, the level of fertility at which a population exactly replaces itself from one generation to the next, in 17 of 28 states. This means that couples in most parts of India have just two children. And in the remaining states, the pace of the decline over the last decade has been significant in most areas, and across all social groups, and will likely reach replacement levels in the next two decades. The wanted total fertility rate in India, that is, the number of children a couple wants or wanted over the course of their married life is just 1.8, well below replacement level in all but four states

California’s population grew by just 50,635 people during the 12-month period ending July 1, which is close to a statistical zero. California barely escaped joining New York and the nine other states deemed to have lost population.

There is a case for believing that the biggest contribution to mitigating climate change right now is declining fertility around the world. However, Professor Corey Bradshaw of Australia’s Flinders University modelled what would happen if the global fertility rate dropped from 2.4 to 2 tomorrow: the population trajectory would reduce by about 50 per cent by 2100, but we’d only get a 7 per cent decline in total emissions, because most come from developed nations where the rate is already low.

Once again it reveals that civilisation's survival it is not about the numbers game but depends on society changing its economic structure to one that is in harmony with our environment and which is sustainable. It is not about zero population growth but developing a steady state economy's zero growth and that can only be accomplished by ending capital accumulation, expanding markets to extract bigger profits. Only socialism can achieve that. 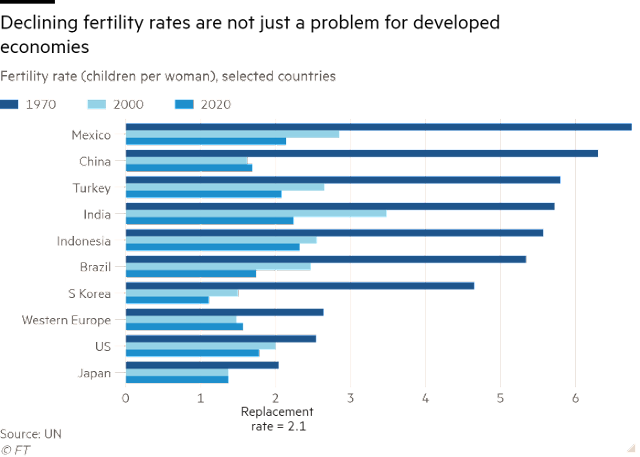