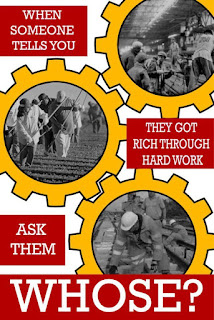 Senior executives in the UK’s top 100 companies took just 33 hours to be paid more than the typical worker’s annual salary, according to data that unions say should be a “source of national shame”.


Figures released by the High Pay Centre thinktank showed that the typical FTSE 100 chief executive is paid 117 times more than the median worker, at £901.30 an hour or £3.46m a year.


It means that by 5pm on 6 January 2020, the chief executives of Britain’s largest listed businesses will have pocketed more than the £29,559 annual salary earned by the median full-time employee, who is taking home about £14.37 an hour.
Frances O’Grady, TUC general secretary, said: “This tells you everything about how unfair our economy is. Every working person plays a part in creating Britain’s wealth. But people at the top are taking more than their share.
Tim Roache, general secretary of the GMB union, said: “It should be a source of national shame that in just a handful of days, company fat cats will have made more money than the typical UK full-time worker will earn in the entire year. These empires are built on the back of hardworking staff, many of whom will be struggling to make ends meet.”
Based on 2018 data, in which the former Persimmon boss Jeff Fairburn was the highest paid after receiving £39m, plus a £85m bonus.
After Fairburn, the Royal Dutch Shell boss Ben van Beurden was the second highest paid chief executive with a total package of £17.8m.
https://www.theguardian.com/business/2020/jan/06/pay-ratios-source-national-shame-high-ftse-boss
Posted by ajohnstone at 6:00 am