The Scramble for the North Pole

Like the late 19th-century “scramble for Africa”, when European empires expanded colonial control of the continent’s land mass from 10% to 90% in 40 years, the Arctic region is up for grabs. As was the case then, the race for advantage is nationalistic, dangerously unregulated, and harmful to indigenous peoples and the environment.

With the climate crisis and global heating there is a realisation that the Arctic’s vast, mostly untapped resources were becoming more accessible. It is believed the Arctic contains around 13% of the world’s undiscovered oil reserves and 30% of its natural gas reserves, plus huge deposits of minerals such as zinc, iron and rare earth metals.

The melting ice means long-distance sea passages, such as the Northern Sea Route (NSR) from eastern Siberia to the North Atlantic, are increasingly navigable. Sailing a container ship from China to northern Europe via the NSR can shorten the journey time via the Indian Ocean and Suez canal by 10 days. And in the west, the Alaskan- Canadian  route soon will be commercially viable.  A disputes between Canada and the US over the Northwest Passage has already arisen.

There is a growing military and strategic dimension. Russia, the largest Arctic nation by geography, is building new military installations and power plants. A Pentagon report in June stressed the need to maintain US “competitive military advantages”.

Under international law, the north pole and the Arctic ocean surrounding it are not owned by any country. But coastal states all have 200 nautical-mile exclusive economic zones. They also maintain overlapping claims to extended continental shelf resources.
Several states regard areas of the Arctic seas as territorial waters and dispute international rights of passage. Russia has unilaterally introduced regulations for NSR shipping that others reject. The US refuses to ratify the UN’s Convention on the Law of the Sea. Meanwhile,China is in on the Arctic act, too.  China has declared itself a “near Arctic state” – a meaningless term but one that  implies it, too, has rights.  China’s development with Russia of natural gas fields such as the Yamal peninsula and its civilian research efforts were harbingers of a “strengthened future Chinese military presence” in the Arctic potentially including nuclear submarines, the Pentagon warned: “China’s predatory economic behaviour globally may be repeated in the Arctic.” China’s main focus at present is not military but on energy and resources, via investment in Arctic countries.  It refers to the NSR as the “polar silk road”.
The US navy is reportedly planning Arctic “freedom of navigation” operations similar to those in the South China Sea, using assets from the US 2nd Fleet that was relaunched last year to raise America’s profile in the North Atlantic and Arctic. NATO is also taking an increased interest in the “security implications” of polar activities, its secretary-general, Jens Stoltenberg, said this month. All this increases the risk of conflict.
https://www.theguardian.com/world/2019/aug/24/trump-greenland-gambit-sad-sign-arctic-up-for-grabs
For further background information go to Socialist Courier and use the search facility for "who owns the North Pole" and almost a hundred posts will be shown, going back to 2007. 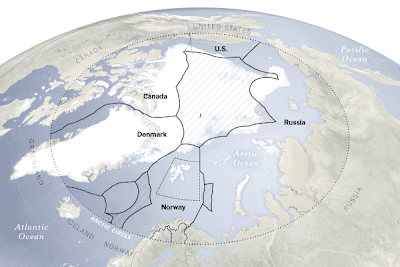