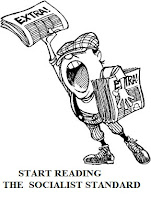 The upward march of humanity

Changes of a profound nature are taking place in the world. The demand for production for use to satisfy the wants of the people and not for profit has distinct revolutionary implications and presupposes revolutionary action for its realisation. Today capitalist ownership of the means of production and its legal right to the exploitation of labour stands in the final analysis determines all political relations; which is another way of saying that those who own and control the means of production are those who rule. The mere change to government ownership or public ownership, so long as these capitalist relations remain in effect, would therefore not suffice. It is nonsense to assume that production for use, which pre-supposes the expropriation of the means of production and the transfer of the ownership thereof to the producers, can find its realisation without the overthrow of capitalist rule. In other words it can find its realisation only through a socialist revolution. This is elementary.

Socialism is the economics of abundance that presupposes the abundant availability of material goods to ensure full satisfaction of human needs. Only in a society which ensures to humanity such an abundance of goods can a new social consciousness be really born. Capitalism is a system which puts profits above all other considerations. The working class can open up the way to a new world. They are the majority. They have the power. All that is necessary is for the working class to understand it—and to use it.

The Socialist Party firmly believe the the workers, the people will help save the world by saving themselves. In peace or in war, in boom times or recession, capitalism cannot satisfy the basic needs of working people. So long as the rich continue to extract profits from the sweat and blood of the toilers, they do not care how many go hungry and homeless, and lack all hope for the future. The prodigious productive capacities of our economy can easily create enough for everybody. Only a clique of capitalist oligarchs and plutocrats stand in the way of abundance. The workers have to wrest control of the factories and other means of production from the hands of the capitalists to establish their own command over industry and society. Production for profit must be replaced by production determined by the needs of the entire people and directed by the associated producers themselves. This is the socialist remedy for capitalist insecurity and misery.

Will working people permit the small number of capitalists to ravage

the national resources, and exclude the majority of the population from rational management and enjoyment of the land? It is the capitalists who are the barbarians i, resorting in their desperate struggle for financial survival to the most fiendish practices. To remove them from the seats of power is the central task of our generation. Mankind cannot resume its upward climb until civilisation is rescued from capitalism.

Posted by ajohnstone at 4:07 am