Fracking has to stop

Professor Robert Howarth, a scientist at Cornell University, warns that the fracking boom in the U.S. and Canada over the past decade is largely to blame for a large rise in methane in the Earth's atmosphere—and that reducing emissions of the extremely potent greenhouse gas is crucial to help stem the climate crisis.

This recent increase in methane is massive. It's globally significant. It's contributed to some of the increase in global warming we've seen and shale gas is a major player," Howarth said in a statement.
"If we can stop pouring methane into the atmosphere, it will dissipate," he added. "It goes away pretty quickly, compared to carbon dioxide. It's the low-hanging fruit to slow global warming."

Howarth wrote in the study, published  in the journal Biogeosciences. "We conclude that shale-gas production in North America over the past decade may have contributed more than half of all of the increased emissions from fossil fuels globally and approximately one-third of the total increased emissions from all sources globally over the past decade." He added, "The commercialization of shale gas and oil in the 21st century has dramatically increased global methane emissions."


In addition to being the second-biggest contributor to the climate crisis after carbon dioxide, methane has been known to cause and exacerbate health issues for people who live in areas where large amounts of the gas is present in the environment. Chest pains, bronchitis, emphysema, and asthma can all be caused or worsened by high levels of methane. The process of fracking has also been linked to pollution in drinking water.

Howarth urged fossil fuel companies—and the government agencies charged with regulating them—to reverse course, shift to a renewable energy economy, and "move as quickly as possible away from natural gas, reducing both carbon dioxide and methane emissions."
Cutting emissions of methane promptly would have a positive impact on the atmosphere and could help to slow the climate crisis, because the atmosphere reacts quickly to the addition and subtraction of the gas.
https://www.commondreams.org/news/2019/08/14/fracking-boom-us-and-canada-largely-blame-massive-rise-global-methane-levels-study 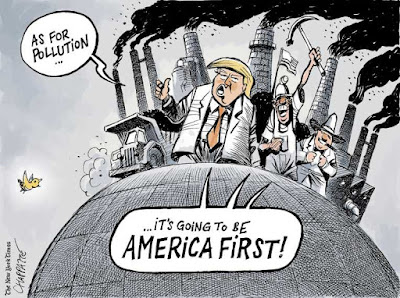