This article had a number of useful stats that demonstrated the inequality in American society. The conclusion is one that calls for a re-distribution of wealth and support for Elizabeth Warren's wealth tax upon the rich, rather than calling for an end to capitalism itself, the creator of inequality

Below is a table derived from the Federal Reserve Board figures showing the share of the country’s total net wealth (value of assets minus liabilities) held by the wealthiest 1%, the wealthiest 10%, the poorest 90%, and the poorest 50% of the population. The figures are for the first quarter and last quarter of each president since 1989. For W. Bush, the last quarter of 2007 is included to show the impact of the recession. 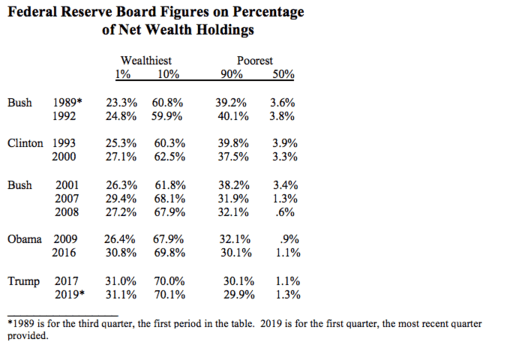 As can be seen in the table, policies during both Republican and Democrat administrations resulted in increases in the share of the nation’s total wealth held by the wealthiest 1% with a tiny gain so far under Trump


These figures also indicate that the poorest 90% of the U.S. population share of the country’s net wealth declined during this period from 39.2% to 29.9% for a drop of almost 25%. Furthermore, starting during the Obama administration in 2014, for the first time since 1989 (see Fed figures,) the share of the wealth held by the richest 1% exceeded the amount held by the poorest 90% of the U.S. population.


Strikingly, during the entire period from 2010 through 2012, the share of net wealth held by the poorest 50% was at times negative and never exceeded


one-tenth of one percent, and fell to as low as minus .2% in the second quarter in 2010. This meant that at that time, had the poorest 50% been able to sell all of their assets and used the proceeds to pay off their debts, using the fed’s figures, they would have still owed $140 billion. What must have been the key factor accounting for this situation was that the value of their real estate (for most, their homes,) was at $2.63 trillion while their home mortgages were $3.68 trillion—meaning their real estate holdings in 2010 were over one trillion dollars underwater.


By the first quarter of 2019, the poorest 50% held real estate valued at $3.6 trillion while their home mortgages stood at $3.13 trillion for a net value of $.47 trillion. That is a turn-around in the net value of real estate of about $1.5 trillion that helped to bring their overall net positive wealth to $1.3 trillion.
To show the net wealth differences between the richest and the poorest people in the U.S., here are the holdings of different parts of the population as of the first quarter of 2019, and the average held by each individual member using 330 million as the U.S. population:


during Obama’s eight years, the share of net wealth held by the top 1% went from 26.4% in Obama’s first quarter to 30.8% in the last quarter of his time as president. These figures showed such a large increase [4.4%] presumably due to the recession continuing during the start of Obama’s presidency and later “recovery” that was favorable towards the rich.


By contrast, the share of the net wealth held by the wealthiest 1% during Trump’s time in office, from the first quarter of 2017 until the first quarter of 2019, went up a minimal percent from 31% to 31.1%. (It was as high as 31.6% during two quarters in this period.)
The top 1% has owned about 50% of all corporate equities and mutual funds during Trump’s time meaning they can be assumed to reap major gains when the value of these assets increases. The Dow Jones Index was up over 17% and the Nasdaq even higher, 22%, by the end of Trump’s first two years despite being down in 2018. Both stock indexes shot up during the first quarter of 2019 with the Dow Jones Index up over 11% and the Nasdaq by 15% from where they stood at the end of 2018.
The share of all income going to the top 1% has generally been growing. According to the Fed, it went from 16.48% of all income in 1989 to 23.8% in 2016.

Just 10%, about $3 trillion, of the wealth currently held by the top 1% being taxed or confiscated could be used to enable many others to have a more decent standard of living. In 2018, the government estimated the number of homeless people at 552,830. $3 trillion comes to over $5.4 million per homeless person, an amount that could provide them with a luxurious lifestyle while having no or little impact on the consumption of the super wealthy.
$3 trillion could provide the roughly 40 million impoverished citizens with $75,000 each. With $3 trillion, student debt could be eliminated and there would still be about $1.5 trillion left over to repair the country’s infrastructure or to build three million units of housing costing $500,000 each. The United States Department of Agriculture estimated that over 40 million people in the United States suffered from food insecurity in 2017. To provide each of these people $15 of food per day would cost less than $219 billion which is less than 8% of $3 trillion.
https://www.counterpunch.org/2019/08/13/the-federal-reserve-boards-recent-figures-on-the-outrageous-unequal-distribution-of-wealth/
Posted by ajohnstone at 11:46 am