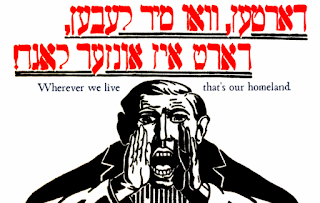 Many movements have competed for the allegiance of the workers during the twentieth century, all claiming some new panacea to make capitalism palatable. The Jewish workers have been exposed to them all. The goal of the Zionist movement was that to establish a “national home for the Jewish people” as the only way to end their age-old persecution. At the time that Zionism was developing as a political ideology, millions of Jews were skilled and unskilled workers; some on the land, in the factories and workshops. Only a minority were merchants of any substance, bankers and factory owners. In this background, it was the ideas of social-democracy and even anarchism that gained acceptance. The Jewish Labour League, the Bund, which was affiliated to the Russian Social-Democratic Labour Party, had as its purpose Jewish cultural autonomy within a democratic Russia. They saw that on the principle of divide and rule. They were convinced that anti-semitism was a by-product of the private property system and would end with the end of that system. The Jews were just used as a convenient group, easy to label and point the finger at. They did not think in terms of a return, to “the promised land” as a solution to their problems. Instead of falling for the divide and rule tactics which weaken us all, workers should recognise who their real enemy is and work together to defeat the system that enslaves us all.

What of that “historical right” of the Jewish people to settle in Samaria and Judea (the West Bank)? There are, of course, two main opposing points of view: the area, in biblical times, was Jewish and is thus part of the traditional Jewish homeland; Arab occupancy for a couple of thousand years - more or less - makes it Arab territory. Upon analysis, both views are unsound and unfounded. In the first place, there is no real essence behind the premise that those who espouse Judaism (willingly or not) in our times are descendants of those early Jewish inhabitants of Samaria and Judea. Aside from the intermarriage and general miscegenation between Jews and non-Jews in medieval and modem times Judaism, in very early times, was a proselytizing religion, particularly so in the early years of Rome.

Originally Zionism was conceived as a means of solving the problem of anti-semitism. From this point of view, where the problem does not exist there is no need for the solution. However, ends and means were inverted long ago, and Zionism became an end in itself, with anti-semitism a condition of its success. Anti-semitism might still be regarded in principle as an evil, but as a necessary evil. Often it was also said to be a lesser evil compared to the threat of assimilation. If Israel is to be a homeland for the Jews, then what is to happen to those not invited to the new land of supposed equality? The answer is to be found all too evidently in the recent brutalities committed by the Israeli state on the Gaza Strip and West Bank.  It has now been several decades that the first Jewish colonists returned from the diaspora and the Zionists have had the chance to work out their theories in practice; Israel has been established. What evidence is there as to whether Jewish workers are any happier in capitalist Israel than they are in capitalist Britain or America?

Like the black South African resistance movement, engaged in a long struggle against white minority rule, the stone-throwing youth of Palestine can perhaps be forgiven for perceiving their struggle to be one against a form of apartheid and ethnic cleansing.  Israel indignantly rejects the comparison with apartheid, nevertheless, the former Italian premier Massimo D'Alema said he had a long conversation with Sharon who explained at length that the Bantustan model was the most appropriate solution to the conflict. Defenders of Israel protest that the comment was a personal interpretation of what Sharon said." D'Alema, however, insists. "No, sir, that is not interpretation. That is a precise quotation of your prime minister."

Yet when it comes to the nationalistic zeal and religious fervour in the respective communities, there is nothing at all with which we can identify, for both are abstractions that have imbued the workers of the region with a mistaken ideas that prevents them identifying their real interests. The labels, Palestinian or Israeli, disguises the bigger and more permanent label of "working class". As the warring factions continue to vent their hatreds we can only maintain that there is more that unites them as members of that exploited majority, the working class with the same basic needs and desires than can ever divide them along religious or national lines. For the real conflict is yet to be waged—that between ourselves, the exploited, and the master class. Only when Israeli and Arab workers join the movement for world socialism will the conflicts finally cease. If the Palestinian nationalists ever manage to establish a sovereign state, they will still be disinherited slaves of the minority who own and rule the earth, privately and through the State. But they may have the satisfaction of slaving for an Arab employer under "their own" Palestinian flag. Until the hold of nationalist and racist poison on the minds of the world's workers is ended, it will not be possible to build the full and satisfying life of socialism.

This is not a pious hope for the future. Workers are dying in Gaza and in Israel and there is every sign that more will be killed. A two-state settlement will not eliminate capitalist rivalry over resources and spheres of influence. The seeds of future war will remain. Yet we will welcome even a fragile peace that temporarily halts the horrors of occupation. That is partly because we sympathize with the suffering of our fellow workers, whatever their ethnic origin. It is always they who suffer the brunt of their masters’ wars. It is also because war provides an ideal opportunity and excuse to suppress democratic rights on both sides. Peace will create better conditions for democracy. No longer obsessed with ethnic conflict, “Jews” and “Palestinians” will be able to refocus on the social, economic and ecological problems spawned by the “normal” peacetime functioning of capitalism. A space for socialist ideas will open up in this small corner of the planet.

Neither Jews nor Arabs, for the most part, could lay claim to meaningful ownership of the land on which they lived in biblical times any more than they can today.  Throughout the period of recorded history “Our Land” in any part of civilization has been, mainly, the property of a small ruling class minority of any national population. Events have only proved our contention, that national struggles, whether of the Zionist category or otherwise, are not in the interest of the working-class. The Israeli working class was convinced that their interests lay in taking up arms against the Arabs, and in this, they were supported by countless Jewish workers abroad. Some of them went even further, attaching great importance to the capture of the ancient shrines and religious symbols of Jerusalem. Here is evidence that the Israeli working class has all the delusions which are so necessary to the continuance of capitalism. Experience, and a knowledge of capitalism should have taught them differently.

Posted by ajohnstone at 7:44 am

"Originally Zionism was conceived as a means of solving the problem of anti-semitism."

Not so, in my opinion. From start to finish Zionism has been a means to invest capital and to secure a captive labour force — both Jewish and Arab.

It's supposed role as a means to counteract anti-Semitism is just an ideological front. Anti-semitism has not diminished by the establishment of the Zionist State of Israel. Quite the contrary, it has provided a focus for it.

Yes, you are correct in judging that Zionism has not reduce the degree of anti-semitism and as another recent blog noted:
"...The establishment of Israel did not end anti-semitism. In fact, it caused it to spread to where it had never existed before - to the Arab-speaking parts of the world. For centuries Jews had lived in peace and security, integrated and speaking Arabic, in these parts of the world. Now, as a direct result of the establishment of a Jewish State in Palestine,, they came to suffer the same persecution that the European Jews had. The result was that centuries of integration was undone in decades. Today there are virtually no Jews living in Arab countries: most Arab Jews are now in Israel where they form an underprivileged group..."
https://socialismoryourmoneyback.blogspot.com/2018/04/dream-or-nightmare.html

In recent years since the intifada, the policy has not to employ West Bank Palestinians an instead to bring in Asian and Eastern European "guest workers" under strict guidelines.
"....the Israeli attempt to decrease its reliance on Palestinian labour by the mass use of ‘guest’ workers from Asia, estimated to be 300,000 who are denied the opportunity of citizenship. In 1987, the year the Intifada began, Palestinians comprised nearly 8 percent of the Israeli labour- force. The uprising prevented Palestinians from traveling back and forth to jobs inside Israel, and threw the economy into crisis. In response, the Israeli government began to import workers from abroad. By 2000, foreign workers comprised 12 percent of the Israeli workforce. Unlike the Palestinians who went home to Gaza or the West Bank at the end of the work-day, many of those foreign workers have chosen to settle..."

As for your suggestion that from the start Zionism was capitalist inspired, many in the Jewish Bundist movement shared that opinion.

Anarchist Emma Goldman in her 1938 work On Zionism identified 'Zionism as the dream of capitalist Jewry the world over for a Jewish State with all its trimmings, such as Government, laws, police, militarism and the rest. In other words, a Jewish State machinery to protect the privileges of the few against the many.'

The SPGB noted that the founders of Israel sought to expel as much of the Arab majority as they could and make their profits by creating an almost all-Jewish working class in the mistaken belief 'it is better to be exploited by one's fellow countrymen' (Marx 1848).