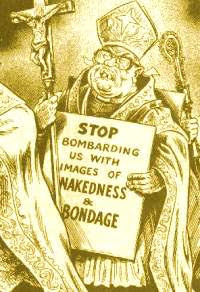 God works in mysterious ways. Given my love of God and my belief in God and in Jesus Christ, I have to accept that I may well be used by God
in this way. ( James Anderton, Chief Constable
of Greater Manchester, 18 January 1987)

It has been quite a while since God has chosen a human prophet to inform us mortals what is going on in his supernatural mind. A couple of thousand years ago he chose a popular illusionist (virgin birth, turning water into wine, making the blind able to see: the usual tricks) who told the oppressed to submit to their masters and wait for eternal happiness in a paradise beyond the grave. The meek shall inherit the earth, said Jesus. The meek are still waiting for the inheritance to occur. The wise have more sense than to accept a morality of meekness. According to his evidence in the dock at The Old Bailey, Peter Sutcliffe, the Yorkshire Ripper (mass murderer of women) heard a voice from God telling him to commit the murders. The Judge was unimpressed and tried to decide whether the defendant was insane. Odd really, when you consider that Judges accept evidence in courts as being more likely to be truthful because it is sworn on oath to this invisible Big Man called God. The latest recipient of God's message is Chief Constable Anderton, who by his own account was on his way to a seminar on AIDS when God forced his words into his mind, leaving the poor copper no alterative but to make a fool of himself repeating them in public. Said the divinely-inspired officer,
"Why do these people freely engage in sodomy and other obnoxious sexual practices knowing the dangers involved? As the Years go by I see ever increasing numbers of them swirling around in a human cesspit of their own making. I worry intensely about the real possibility of whole generations being wiped out and nations decimated."

He may worry intensely about this curious vision of increasing numbers of human beings creating their own cesspits with a view to wiping out future generations. He would however do better to worry intensely about the whole generations who stand in immense risk of being blown to pieces by capitalism's bombs and the chemical and biological weapons which are sick and murderous, but which have received no condemnation to date either from God or his specially picked, uniformed messengers. Needless to say, the moral totalitarians who are ready and waiting to tighten the chains on the recently too-permissive wage slaves were quick to bow down to the newly-discovered prophet. The Sun, the paper printed by scabs and read by dummies, quoted Anderton's words and declared that

"All these words were exactly right. Mr Anderton was merely giving voice to what every reasonable man and woman feels."
(Editorial, Top Cop's Words of Wisdom, 22 January 1987).

So you either agree with God's top cop or you are by definition unreasonable. According to the Gospels (a confused assortment of unhistorical stories and reported hallucinations), Christ said that those who did not agree with his every word would be eternally damned - left to burn in Hellfire forever. It seems as if Jesus had a conception of compassion and tolerance similar to that of the Sun. Indeed, the paper which is so crazy that it has to be printed behind barbed wire was not slow to point out the similarity between Christ and Anderton:

"There are suggestions that James Anderton is mad. The same charge could just as easily have been brought against Jesus Christ when He came to Earth."

Indeed, it could. Let us for a moment entertain this religious fantasy that the world and all of us who inhabit it are the children of a Holy Father - never seen, but ever feared - who rules over us and must be obeyed to the letter of his commandments. Now, it tells us something about the condition of millions of workers if they can be persuaded that they are the little children in need of an invisible Father, but let us examine the Christian Anderton conception of fatherhood. God, The Father (he also works as a Son and a Holy Ghost) tells us those certain forms of behaviour are wrong. Some of his children disobey the God-Father and do what is "wrong". His fatherly response is to invent a fearful, painful disease which will wipe out vast numbers of his children, thus teaching them to obey him in future. In recent years we have read in newspapers like the Sun about fathers who have acted in this way: they have beaten their children, put out cigarettes on their bodies, locked them in drawers. These constitute a small minority of fathers but we all know of these cases and our response is that of horror and outrage. How can a parent, however frustrated they might be at the behaviour of their children, be so cruel and vicious and crazy? But according to the Christians like Anderton, this is precisely what we should expect a father to do, the only way to teach workers the right way to behave is to kill off a few of them for behaving the wrong way. If God was a father he would need to be given help by others less deranged than himself; his children would need to be taken into care. That is what those who think they are God's children need: to be taken into care - not the care of another phoney god-image or of the state or of offensive and fascistic police chiefs but of themselves. Transcending religious folly means learning that we are not little children destined to obey a Master, but that we are capable of controlling our own lives. As a devout Christian prophet and as a leader of uniformed state coercion, James Anderton will not like the sound of that, people making their own decisions - no gods, no cops, no bosses? That will give him something to worry intensely about.

In the USA, where the God Squad make plenty of dollars out of screwing up workers' minds, there is no shortage off Anderton-style fanaticism. Last October seven Christian families won a case against the State of Tennessee on the grounds that books used to teach children to read were "heathen". They argued that letting children read Goldilocks and the Three Bears encourages breaking and entering. Other objections - upheld by the court-were to a picture of a boy cooking and a story of a wife challenging her husband's authority, both of which were held to be contrary to God-made Nature. The State of Louisiana has a law, passed in 1981, forcing schools to teach the theory of creation to the exclusion of other, scientifically based, theories. It seems that the current moral backlash in the USA is leading to a number of cases being brought to court by Christians aiming to censor ideas from state education. According to a report in The People (22 November 1986)

"Thirty-nine per cent of the (legal) attacks occurring in the last year have led to the actual removal or restriction of the "offending" material. Curricula dealing with subjects like nuclear war and the Nazi holocaust have been attacked. Literature from Homer to Hemingway has been attacked and sometimes removed from library shelves. Texts mentioning evolution have been vetoed by school boards. Some science text publishers are already practising “self-censorship". One study found that half of all biology texts today don't cover evolution adequately and one-sixth don't cover it at all."

So much for The Land of the Free. Religion and morality have always been about forcing people to conform in their ideas. The conformity required is that which meets the needs of the profit-stealing ruling class. From James Anderton to the anti-scientific Christian bigots of the USA "God's word" is the sermon of ignorance and unconsciousness. No self-respecting worker will fall for it for long. Let us banish the Gods from our minds and the capitalists from the earth. Without such impostors on our freedom to live as brothers and sisters, humankind will discard our bosses' stinking morals as we learn to live together as a human family of equals.

STEVE COLEMAN
Socialist Standard March 1987
Posted by ajohnstone at 6:00 am