Is the working class still the agent of socialism? 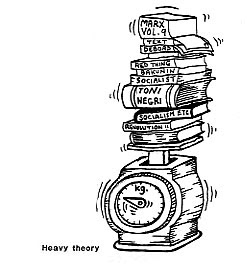 If You're an Egalitarian, How Come You're So Rich? By G A Cohen. Harvard University Press, 2001.

In 1978 Cohen wrote a basically sound (if tedious) book called Marx's Theory of History: A Defence. In this series of lectures given in 1997 but only published as a paperback last year he explains why he now thinks Marx was wrong after all.

He claims that Marx's agency for the socialist revolution was the "industrial" working class which would form the majority of the population but that this has not come about because of the rise of modern technology which has resulted in the "industrial" working class forming a shrinking proportion of the working population. However, Marx was well aware that the development of the division of labour and specialisation would lead to the development of a section of the working class not involved in direct factory work.

When workers are trained to perform certain tasks for example, they have to be taught and instructed, and this involves teachers and instructors. The teacher or instructor can teach or instruct inside the factory or outside it in a school or college. It is absurd to regard the teacher as an industrial worker when employed inside the factory but a "middle class" professional when employed in a school or a college. The function they perform is exactly the same and so also is their relationship to the means of production – they are still teaching or training future workers and they are still reliant on a wage or salary in order to survive.

As industry becomes more complex and as technology develops there is a need for an increasing army of educators, organisers, researchers and the like. As a result the proportion of "front line", factory workers shrinks. This change in the composition of the working population does not alter one iota their relationship to the productive wealth of society, nor does it alter the fact that it would be in their interest to overthrow capitalism. There is no justification for regarding factory workers as being exploited whilst teachers, lecturers, organisers, researchers, etc are able to escape this exploitation. It is true that most of these "white collar" workers would deny that they are being exploited but so also would most factory workers.

Cohen claims that workers in advanced industrial countries are no longer exploited (not that he defines what he means by exploitation). His claim is that exploitation now takes place in the factories and sweatshops of underdeveloped countries and that only these fit Marx's description of the industrial proletariat. However, he goes on, these again cannot be regarded as the agents of revolutionary change as they do not constitute the majority of the population in these countries because they are swamped in a sea of peasants. He does not pay any attention to the fact that the "exploitation" of his workers in the underdeveloped world has led to the undermining of the incomes of factory workers in the advanced countries.

He concludes from this that there is no hope of a revolutionary transformation of capitalist society and that only a development of altruistic attitudes can usher in a better and different world. He can only come to this pathetic conclusion by either ignoring or not understanding the capitalist system.

Most liberal political philosophers who claim to strive for "a just and equal society" view modern society as being stratified from top to bottom into different income and status groups ("social classes") and that it can only be a question of redistributing wealth more "fairly" within these groups. Other political philosophers see this as posing a potentially serious problem in that it could lead to a slacking of effort on the part of the top strata as this could affect their efficiency and effectiveness "in the pursuit of the general good". In other words, that there is still a need for some inequality in order to provide an incentive for those able and willing to take on demanding, responsible positions in society.

Volumes and volumes are written on this theme and writers like Cohen demonstrate their learning and cleverness by finding loopholes in each others' theories and developing their own irrelevant versions of the same. What they have to say and write has no bearing on what is happening in the real world. For the real world is not merely made up of a population stratified into different income groups. It is true that the working class can be divided into different income groups. But between these groups there is no direct opposition, tension and conflict – they are just groups of people having different characteristics in terms of income, education and status.

The real world is a world in which the population is divided into two main groups obtaining their incomes in distinct and completely different ways. One group obtains its income from the ownership of the productive wealth of the world and the other group obtains its income from the sale of its labour power to the owners of productive wealth. The first group has to attempt to continually increase the productive wealth its owns by continually revolutionising their productive techniques and by attempting to reduce or limit the income of the non-owners. To do this they have to accumulate as much wealth as possible under given market conditions. The whole system depends upon, and is defined by, this compulsive need of capitalists to accumulate wealth. To think that it is possible to intervene or halt this process through any system of redistribution of incomes – either through taxation or "rich" egalitarian political philosophers foregoing part of their incomes – is unrealistic nonsense. The social system such philosophers wish to reform bears no resemblance to the social system they conjure up in their analyses.

Nowhere is Cohen's pathetic position more clearly demonstrated than in his belief that he and his fellow philosophers are "rich". They are not rich even by comparison with other salary earners; when compared with the incomes of the capitalist class their incomes are pitiful. What is more, like most workers they have to consume their incomes in order to survive at the prevailing standards of comfort of their peers. The individual consumption of the capitalists, on the other hand, although often colossal when compared to the individual consumption of workers, is normally only a small proportion of their income as they are compelled to accumulate most of it in order to survive as capitalists.
Lewis Hopkin.
Posted by ajohnstone at 11:08 pm

While not relevant to the focus of the article, it does seem a bit lenient to describe 'Marx's Theory of History' as 'basically sound'. While it's the best at putting forth its viewpoint, Sayer manages to show it incorrect on a fair few issues in the (not flawless itself, but still good) book 'The Violence of Abstraction'.
Though I haven't read the reviewed book, it does sound somewhat similar to Third Worldism, advocates of which generally justify the claim that workers in the 'first world' don't produce surplus value by some assertion that variable capital equals value created in order to buy them off or something of the sort. But then again, I don't recall Cohen accepting the theory of value, so he probably used one of the theories of exploitation set forth by the so-called 'Analytical Marxists'.