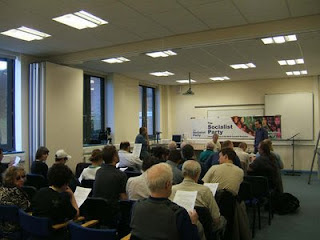 The first thing I must say is credit for the organising of the summer schools at Fircroft College over the years was rightly accredited to the recently deceased comrade Ron Cook of Birmingham branch, however, he has left the branch members determined to keep their efforts to his high standards, so I can say the social activities were pleasant and relaxing.

Sandy Easton opened up on Friday evening with “The Real Meaning of Religion”. Does religion represent some sinister plot by the ruling class to keep us down, or does it express an earnest attempt by men and women to answer serious and meaningful questions? Will religion uniquely continue to answer a fundamental human need, or is it high time we transcended this psychological baggage of or past? Was all this missing the point anyway, and what is the real meaning of religion?

Mike Foster on the Saturday morning introduced “End Times Beliefs”. Perhaps the most extraordinary book in the Bible is its final one –­ The Revelation of St. John the Divine. Here, we are given vivid prophecies about the end of life as we know it. And it’s not pleasant. While downplayed by most mainstream Christians in Britain, the events predicted in Revelation have been central to the belief systems of many smaller religious movements. However, this does not mean that End Times beliefs only exist on the fringes of Christianity. The scenario described in Revelation has seeped into our consciousness in many unexpectedly way. And while they may tell us nothing of the future, End Times beliefs tell us plenty about peoples hopes and fears.

Howard Moss, on Saturday afternoon discussed the question of “Is Socialism a Faith?” Is Socialism a replacement religion in the sense that it’s a belief in some kind of absolute? Why is it that people of a religious disposition are not infrequently attracted to socialist ideas, at least until they are told the two are incompatible? Does socialism have a ‘spiritual’ dimension, and will it be able to satisfy spiritual needs?

Gwynn Thomas introduced Saturday’s evening study “Islam, Politics and Revolution”. One in five of the world’s population claim adherence to Islam. What they claim this entails and what this might mean for non-believers. Some politicians and commentators have identified Islamism as one of the most serious challenges facing the world. They point to the threatened and actual use of deadly violence by some Muslim groups. How real is this threat? What motivates the protagonists? Is their dispute with the rest of world theological? Or is it political? A distinction was drawn between Islam as a religion and Islam as an ideology.

The concluding session on Sunday morning introduced by Adam Buick “Evolution and the God Hypothesis” considered the questions, did God create plants on the third day, fishes and birds on the fifth, and land animals and humans on the sixth- more or less in their present forms? Or did all existing (and extinct) life forms evolve through the process of natural selection? The mainstream Christian churches, even including the Catholics, have long accepted evolution through natural selection (for them, God only has the minor role of introducing a ‘soul’ into one species). It is only amongst fundamentalist sects that ‘creation’ survives. In America, to get round the constitutional separation between religion and state, the fundamentalists have invented a pseudo- science they call ‘intelligent design’. But it is only a pseudo-science.
Posted by Matthew Culbert at 11:46 am

The proceedings were recorded (for posterity ;-)) and will be available on DVD once the editing and production process has been completed.

The good ship Posterity on which yesterday becomes tomorrow.
:-)