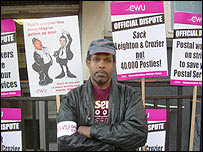 Royal Mail keeps changing the goal posts in the postal strike. What originally started about a pay rise and impending redundancy plans, then involved the fight over pension entitlements and the right to retire at 60 years of age, has now become, for the Royal Mail mandarins, a campaign to end what they describe as "Spanish practices" - a racist epithet that is insulting to the many hundreds of Spanish who work in Royal Mail - and a demand for total flexibility at work.

What just is the "employers agenda", to use a term from the last big postal dispute and eventual agreement of the mid-90s which was supposedly the "way forward" for the business? Is there a hidden motive behind what many see now as a determined attempt by Leighton and Crozier to ensure that no settlement can be reached by negotiation? It is not as if the CWU hasn't a history of compromise or reached deals that often favour management over its own members interests to protect the industry's viability. We have always got to try and look at the bigger picture, which only the bosses and government have the blueprint of, and see beyond the fragmentary glimpses of their real objectives through the fog of battle.

For the worker, it is the money they take home and the amount of work that they must do to earn it that is foremost in their mind, and - let’s not hide from the reality - it is to get the most for doing the least. However, for management, it is the entire opposite. They endeavour to extract the most work out of its workforce at the most minimum of cost. The inevitable class struggle, in other words.

This is the postal dispute, the conflict between worker and boss. And it is management who are the aggressor in this dispute, with:

Note that the pay rise, management's offer, that is ,which was due in April has not been imposed by executive action.

Postal workers. who have withdrawn their labour, have offered to return to work for an increase in pay and more talks over working procedures, but the managers have refused this offer and are holding out and demanding that they accept their imposed changes unconditionally. The Prime Minister and the Secretary of State for Business have told the workers to accept the management’s terms, while the High Court has just ruled next week’s strike unlawful.

The Union want the issue of pensions removed from the pay deal as it is a Group-wide issue, not just for the postal grades. Royal Mail want union support to roll out new technology programme. The CWU say they will agree on the basis that there is a share for workers of any savings made. On a later start, the union say they will accept the principle but that each office should be able to maintain earlier starts if arrival patterns justify it. Isn't that flexibility? Certainly not the Luddite response against modernisation that Royal Mail's PR message endeavour to convey to the general public.

Touched upon above was the question of whether Royal Mail and/or the government possess a secret plan. With a union that is keen to broker a deal, as they have always done before, but with a management that keeps switching the issues it may not be too paranoid of postal workers to believe that such a plan exists. Nor are they the only ones.

"...the DTI, the department responsible for this huge national asset [Royal Mail] , has officials deployed full-time looking at alternative forms of ownership. Regular talks have been held with investment bankers, Royal Mail executives and Richard Gillingwater, head of the Shareholder Executive, which looks after the state's business interests... officials from the DTI have also held deeply hush-hush meetings with Royal Mail executives that have reached the point of discussing the detail of potential changes in ownership, not just the theory..." (Mail on Sunday, 22 August 2004).

A partial flotation of Royal Mail would raise anything between £4 billion and £6 billion if a buyer could be found - a buyer who would like to inherit a low cost and compliant work force with a new more limited pension fund liability - a business with a defeated trade union and demoralised membership.

As socialists, we shed no tears that this nationalised company may become privatised. Only those like Lenin who believed socialism, as he put in State and Revolution, means to "To organize the whole economy on the lines of the postal service" after the example of Bismarck's Germany, remain under the misconception that it matters.

Regardless of ownership, the necessity for postal workers to organise within their industry and resist the attacks of their employers will continue and to which socialists will offer their support and solidarity , whether it is against the likes of Leighton and Crozier, appointees of the State, or against some rival mail company take-over, or a possible future Private Equity buy-out baron. The class war will only cease when capitalism and the wages system ends.

"It is not as if the CWU hasn't a history of compromise or reached deals that often favour management over its own members interests to protect the industry's viability."

Indeed the latest news is that the CWU have once more brokered a deal that concedes most of management's demands and sacrifices its members to the altar of capitalism yet again .

It can be conjectured from the outlines of the agreement that Post Office management will now be able to isolate and pick off recalcitrant offices at a local level that persist in resisting proposed changes to working conditions .

Socialism, strikes, workers, working class. Yawn, how 1970s. The problem with the sheep that strike is that they always attack the innocent - the customers, not the management. So we carry the can. Which is why strikers are so detested by the working class.

The unions need to be more clever in their (in)actions. Get the customers on their side and against the management.

But it'll never happen. Socialism is thankfully just about dead in the UK. It would never have worked. It goes against human nature and is an exclusively middle-class guilt trip.

Good riddance to socialism and its variants.