Are You a Human or a Robot? 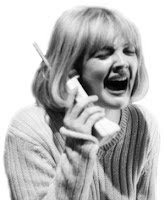 Do you too get annoyed at unsolicited and unwelcome calls from telemarketers? Not only do they call at the most inconvenient moments. They always start with a tedious verification of your identity, so it takes a while before you’re sure what kind of call it is.

Unless, that is, you interrupt and ask: “Excuse me, are you an advertisement?” If you’re a Brit they probably won’t understand the question because you’ve forgotten to stress the third syllable instead of the second. But even if they do understand you won’t get a straight answer. They are following a prepared script that doesn’t make provision for such impertinent interruptions.

Anyway, by this time you know it isn’t a long-lost friend or relative trying to trace you. The easiest thing is to hang up. That’s what I did – usually.

Unless I happened to be in an especially irritable mood. Then I would tell the hapless telemarketer off for invading my privacy, demand an immediate apology, and urge him or her to stop bothering people. I might even inquire: “Are you a human or a robot?” Reactions varied. The most common one was to terminate the call. Sometimes the caller would turn nasty. Once the poor woman at the other end was clearly upset.

That stopped me short. I really didn’t want to upset or antagonize anyone. After all, they were only members of the working class trying to earn a living by selling their labor power – their talking power in this case. They were not robots, but neither were they allowed to be fully human. They were robotized, alienated human beings. One man said: “I’m doing my job. If you can get me another job I’ll give it up.” I reflected that it was largely a matter of luck that I wasn’t in the same plight myself.

Since then I’ve tried not to be too rude to telemarketers. On occasions I’ve been quite nice. But that too is problematic. You see, even when I’m trying to be nice I can’t bring myself to stick to the script. Once I made a joke about the spiel. The talk-seller laughed and responded in kind. That was pleasant for us both, but if a monitor had been listening in she would have got into trouble for abandoning the script. And it would have been my fault.

I decided that I did, after all, want to complain. But I would direct my complaint higher up. I would call the company CEO – or, failing that, the marketing director. At home. At 3 am.

But I got no further than the telemarketer’s immediate supervisor, who adamantly refused to put me in touch with anyone above her. Those responsible for bothering so many people make damn sure they don’t get bothered themselves – the cowardly, hypocritical wretches!

Well, here’s my new line. “I don’t like getting your call, but rest assured I understand your position. You don’t really want to bother strangers all day and endlessly repeat this crap, but you can’t find a better way of earning a living. I deeply sympathize.” I wonder what response that will get. An eloquent silence, I expect. Got to stick to the script.