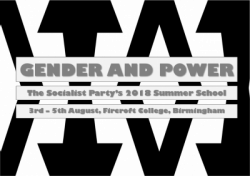 to revolutionary politics. Full residential cost (including accommodation and meals Friday evening to Sunday afternoon) is £100. The concessionary rate is £50. Day visitors are welcome, but please book in advance.

E-mail enquiries should be sent to spgbschool@yahoo.co.uk. To book a place send a cheque (payable to the Socialist Party of Great Britain) with your contact details to Summer School, The Socialist Party, 52 Clapham High Street, London, SW4 7UN.


Scheduled talks so far include:

'INSIDE THE MATRIX'
This talk will argue against the premise that oppression is simply the product of class struggle and that feminism can be dismissed as identity politics which distract from the real issue. Feminism and socialism are not either/or, positions. An understanding of class, patriarchy and intersectionality is crucial to the challenge of establishing a world based on socialist principles.

'EQUAL WORK FOR EQUAL VALUE?'
This talk will look at the relevance of value, and the labour theory of value to discussions around the gender pay gap in the workplace. It will look at value as a story told to lay claim to the output of society, and will relate that to Utopian visions of women and womanhood. It will argue that that value is not a value-free idea, but in fact a deliberate move in the class struggle to enforce the power of the capitalist class. Along the way, this talk will take in how the working class is exploited, and how this exploitation contains within itself the end of capitalist values. Finally, it will suggest that the struggle over equal wages contains within itself the drive toward the abolition of the wages system itself.

Film showing: 'Did Gender Egalitarianism Make Us Human?' by Camilla Power (Senior lecturer in Anthropology at the University of East London)

Introduced by Carla Dee and Richard Field, with discussion afterwards.

'SEX AND POWER'
The sex industry makes up a significant, if partly-hidden, sector of the economy. Prostitution and pornography represent extremes of exploitation, lucrative to those with the power and damaging to those pushed into selling themselves. This talk will examine the differing impacts which the sex industry has on both women and men, and what this tells us about capitalism as a whole.


Dangerous Women: How History And The Establishment Hide Female Militancy
From the militant 18th Century female trade unionists who dunked strike-breakers under water pumps, to the matchwomen, suffragettes and the true founder the Me Too movement, many of history’s most inspiring women have been designated the ‘wrong kind of heroines’ and their stories suppressed or minimised.
Guest speaker Dr Louise Raw has spent 20 years uncovering them, and will introduce or enlarge upon the histories of women of colour, of the working-class and with disabilities, who have much to teach us even today.