Made in Bangladesh (film review) 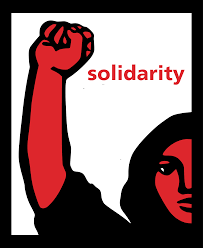 The factory floor of a garment factory in Dhaka, Bangladesh, is the background for Rubaiyat Hossain’s latest film, 'Made in Bangladesh', Hossain’s third feature film.

It tells the story of Shimu Akhtar, played by Rikita Nandini Shimu, a young woman making clothes for western clothing companies whose indignation at the working conditions she is forced to endure leads her to try to unionise the factory. Hossain based her film on the stories of hundreds of garment workers she interviewed over the three years she spent researching and writing the script. The character of Akhtar is based on the life of Daliya Akhter, one of the first women to start a garment workers’ union in 2013.


It opens with a scene of pure, visceral panic: young garment workers trapped in a burning factory. Alarms blare, women scream and smoke fills the stairwells.
“A fire or a building collapse is every garment worker’s greatest fear,” says Hossain. When filming the scene, the women seen desperately running for their lives didn’t need much direction. “Most of the extras we used were former garment workers who had lost their jobs so they had lived out this moment in their imaginations themselves many times when they were at work; it was a risk they all knew came with the job. The emotion they were conveying was very raw and very real.”
Akhtar’s rage at the treatment of herself and her co-workers by a factory management that refuses to pay them, and the brands that make easy profits off their cheap labour, is the driving force of the film.

Hossain says she wanted to smash through the stereotype of the poor, exploited factory worker. “I wanted to show that these women are active agents, fighting for their rights and demanding to be heard,” she says. “Too many people think of Bangladeshi women as victims sitting behind a sewing machine, but it is thanks to female garment workers that Bangladesh is now a middle-income country. And these young women are not victims, they are often feisty, young, spirited women who are fearless and brave. All that beauty and dignity had to be the starting point of this film.”


Hossain’s depiction of life as a Bangladeshi garment worker is also damning of the relentless downwards pressure exerted by the global fashion industry on the workers at the bottom of their supply chains.
“There has been a lot of effort made by fashion brands to distance themselves from the women who make their clothes,” says Hossain. In one scene the women calculate that they make more than 1,600 T-shirts a day, yet two or three will be sold for more money than they make in a month.
She is aghast at the devastation wreaked on the garment industries not just in Bangladesh but in other countries across the global south by the Covid-19 virus. “We’ve seen brands cancel over $3bn of orders in just Bangladesh,” she says. “Factories are closing and people are losing their jobs. They can’t get paid if the brands don’t pay. If they go into work they are not safe from the virus.” As workers across the garment sector warn that the virus is providing cover for union busting, she says this must be a turning point.


“People always say after they’ve seen my film, I’ll never buy clothes from Bangladesh, but this isn’t the answer,” she says. “The answer is that the women are respected and bad conditions not tolerated. Only a tiny percentage of Bangladeshi factories are unionised. These jobs have the potential to redefine life for young women in Bangladesh and the struggle of garment workers to be able to collectively work towards realising their rights must be supported by everyone who wears the clothes they make.”

Posted by ajohnstone at 9:53 am