Each new report on climate change makes depressing reading. The climate crisis has arrived. Many are asking what they can do about the climate crisis. In the four years since the Paris agreement was signed, greenhouse gas emissions have risen by 4% and the talks this year in Madrid are not expected to produce new commitments on carbon from the world’s biggest emitters. UN climate chief Patricia Espinosa said the issue of increased pledges wasn't even on the agenda for the final outcome of this conference.

Greta Thunberg spoke at a press conference before a march through the centre of Madrid and said that although schoolchildren had been striking around the world, this “has not translated into action” from governments. She explained,  "People want everything to continue like now and they are afraid of change. And change is what we young people are bringing and that is why they want to silence us and that is just a proof that we are having an impact that our voices are being heard that they try so desperately to silence us."

The changes in the climate are not isolated events but they feed into and feed off of each other causing a cascading cumulative effect that is leading us passed tipping points to the point of no return. Attempts to reduce global warming are not succeeding. Greenhouse gas emissions are levels are rising. Renewable energy sources are not even meeting new energy demands, let alone replacing polluting forms of energy production. Colder winters and hotter summers mean more energy used to heat and cool our homes and other buildings. The global finance corporations and their subservient governments push financial schemes and green technology to enrich themselves even when those projects don’t solve the problem. Carbon trading has been in existence since the Kyoto Protocol and has not reduced carbon emissions. California’s cap and trade system, one of the largest in the world, is being copied by other countries, but ProPublica found that carbon emissions in California have risen by 3.5 percent under the program as it allows big polluters to purchase credits and even increase their emissions.

A core requirement of effective social movements in their efforts to end the climate emergency  is to have a clear vision of what they are working to achieve. Our vision must embody not only the goal but also the structure of the system that will achieve that goal. The Socialist Party offers its proposals for consideration With its clear vision of where we want to go, so that we can shape the world to be one that respects the wishes and desires of humanity and provide sustainability. That will only come about through organization, planning, and action to create a mass movement. There can be no dispute about its urgency. We can’t solve the climate crisis using capitalist economic models because capitalism is fundamentally about extracting profits at all costs and is based on the overconsumption of a consumer-oriented economy.


Unless there is a sudden, dramatic—and at present unforeseen — change, it will take a long time for the social landscape to change. For socialists do not think in terms of a few minor changes. We aim at a basically different society in which life will be thought out anew. Capitalism will be ended, and socialism established, only through the democratic act of a politically aware working class who have come to an understanding of why this must be and what will emerge from it. That means, in other words, through a massive change in ideas.

The majority of people support the notion that the production of profit and the accumulation of capital are desirable in themselves. Even when this notion is to some extent modified — for example most workers probably think that, say, hospitals should operate on slightly different priorities than making money — its underlying assumption that to survive things must at least “pay their way” is generally approved of. On this basis people accept an enormous range of degrading and restricting provisions in their lives. There is first the fact that very little of the wealth we produce is turned out as the best we are capable of. Food is devitalised, flavoured out of its nature, preserved in chemical brews, portioned and packaged and stacked colourfully onto the supermarket shelves — and millions of people agree that this must be so and that it is good. From our earliest days, what is miscalled our education is a process of measuring us up to fit ourselves into a moral straitjacket of compliance with our place as wage-slaves - as unquestioning, profit-producing members of the subservient class in society. We are taught to hold our social betters in awe, to look on royalty and aristocracy as our betters, to grovel in gratitude and admiration of rich and powerful capitalists without whose wisdom, we are taught, the world would be little more than a wilderness. We can continue to have that society or we can have a revolution in our thinking and enact a social revolution in our daily lives. 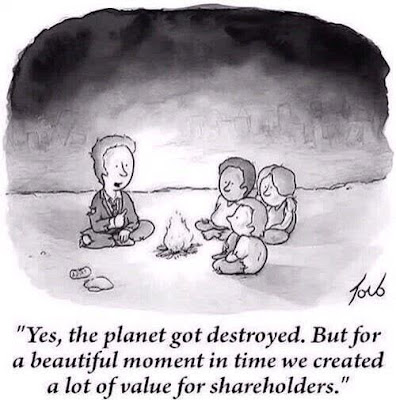 Posted by ajohnstone at 6:21 pm