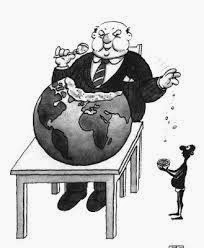 The “ Global Annual Wealth Report,” released by investment giant Credit Suisse, analyzes the trend of growing wealth inequality around the world. What the researchers find is that global wealth has increased every year since 2008, and that personal wealth seems to be rising at the fastest rate ever recorded, much of it driven by strong equity markets. But the benefits of this growth have largely been channeled to those who are already affluent. While the restaurant workers in America struggled to achieve wages of $10 an hour for their labor, those invested in equities saw their wealth soar without lifting a finger. So it goes around the world.

The bottom half of the world’s people now own less than 1 percent of total wealth, and they’re struggling to hold onto even that minuscule portion. On the other hand, the wealthiest 10 percent have accumulated a staggering 87 percent of global assets. The top percentile has 48.2 percent of the world wealth.  The scary thing about the wealth of the super-rich is what French economist Thomas Piketty pointed out in his book, Capital in the 21st Century. Once they’ve got a big chunk of wealth, their share will get bigger even if they sit by and do absolutely nothing. The rich will grow inevitably richer and the poor poorer.  We are returning back to the days of 19th-century Britain or 18th-century France, where great dynastic fortunes ruled and everybody else fought for scraps.

While the global elite zip around the world in private jets and watch their stock portfolios expand on computer screens from within their gated mansions, the bottom half stays awake at night trying to think of how to pay for medicine for a sick child. The things that give life dignity and meaning, like a quality education, a decent job, and the security of knowing you have a roof over your head and a doctor to care for you when you are ill grow further and further out of reach. Anxiety never leaves because one unforeseen mishap can push you down into poverty, and if you’re already there, you spend much of your time searching, often fruitlessly, for a way out.