The 'explosive' nature of global population growth is abating in relative terms.


The population growth rate has been slowing, however, from peak annual rates in excess of 2 percent in the late 1960s, to about 1 percent currently, to half that by 2050. In the 1950s and 1960s, the average woman had roughly five children over the course of her childbearing years. Today, the average woman has somewhat fewer than 2.5 children.
The age structure of a population reflects mainly its fertility and mortality history. In high-mortality populations, improved survival tends to occur disproportionately among children. This effectively creates a baby boom. Eventually, the boom ends when fertility abates in response to perceptions of improved child survival and as desired fertility declines with economic development. But as the relatively large baby-boom cohorts proceed through adolescence and into their adult years, the population share at the peak ages for work and saving swells.
In 61 countries that are currently home to 29 percent of the world’s people, population growth in 2020–50 is projected to be negative, with the sharpest decline (−23 percent) projected for Bulgaria.
Between 1970 and 2020, the fertility rate declined in every country in the world. Fertility tended to decrease more in countries with high initial fertility, another facet of demographic convergence. Among geographic regions, Africa and Europe are currently homes to the highest (4.3) and lowest (1.6) fertility rates, respectively.
If the population’s age structure is sufficiently weighted toward those in prime childbearing years, even a fertility rate of 2.1 can translate into positive population growth in the short and medium term, because low fertility per woman is more than offset by the number of women having children.


This feature of population dynamics is known as population momentum and helps explain (along with migration) why the populations of 69 countries and territories are currently growing even though their fertility rates are below 2.1.


In many developing economies, population growth has been associated with a phenomenon known as the “demographic transition”—the movement from high to low death rates followed by a corresponding movement in birth rates.


For most of human history, the average person lived about 30 years. But between 1950 and 2020, life expectancy increased from 46 to 73 years, and it is projected to increase by another four years by 2050.
Moreover, by 2050, life expectancy is projected to exceed 80 years in at least 91 countries and territories that will then be home to 39 percent of the world’s population. Increased longevity is a colossal human achievement that reflects improvements in survival prospects throughout the life cycle, but especially among infants and children.
Cross-country convergence in life expectancy continues to be strong. For example, the life expectancy gap between Africa and North America was 32 years in 1950 and 24 years in 2000; it is 16 years today.
Cross-country migration is also relevant to population growth. The effects are quite important in some countries, such as Guyana, Samoa, and Tonga, where net emigration in the past 30 years has been appreciable. The Gulf States have had the highest rates of net immigration. Among the world’s 10 population super powers, migrants have the largest relative presence in the United States (15 percent in 2019). For most countries, though, international migration has not been a dominant demographic force, because more than 96 percent of the world’s population currently live in their countries of birth
But capitalism still cannot cope with what should be a success story.
Events of the past decade, ranging from the Arab uprisings to more recent mass protests in Chile and Sudan, also show that countries that fail to generate sufficient jobs for young adults are prone to social, political, and economic instability.
Countries the United Nations classifies as less developed encompassed 68 percent of world population in 1950; today they represent 84 percent. That share will continue to rise, because virtually all of the nearly 2 billion net additions to world population projected over the next three decades will occur in less developed regions.
Nigeria is projected to overtake the United States to become the world’s third-most-populous nation.
The ratios of their working-age to non-working-age populations - the dependency ratio—the inverse of the working age to non-working-age ratio—measures the economic pressure working-age individuals face to support, in addition to themselves, those who are not of working age. In 1990, the ratio in more developed regions was appreciably lower than in less developed regions (0.68 versus 1.04).


This will be especially true in Africa, the only region in which this ratio is projected to decline by 2050.
For countries that have yet to experience appreciable demographic transitions (like Chad, the Central African Republic, Somalia, and Sierra Leone), policies are appropriately oriented toward catalyzing those transitions. Such policies include investment that promotes infant and child survival, such as expanded vaccine coverage as well as wider access to well-provisioned and appropriately staffed primary health care systems.
For populations that have experienced health and survival gains, countries could benefit from policies to enable a decline in fertility, such as promoting girls’ education and access to reproductive health and family planning services.
Population aging is the dominant demographic trend of the twenty-first century—a reflection of increasing longevity, declining fertility, and the progression of large cohorts to older ages.
Never before have such large numbers of people reached ages 65+ (the conventional old-age threshold). We expect to add 1 billion older individuals in the next three to four decades, atop the more than 700 million older people we have today.
Among the older population, the group aged 85+ is growing especially fast and is projected to surpass half a billion in the next 80 years. This trend is significant because the needs and capacities of the 85+ crowd tend to differ significantly from those of 65-to-84-year-olds.
Although every country in the world will experience population aging, differences in the progression of this phenomenon will be considerable. Japan is currently the world leader, with 28 percent of its population 65 and over, triple the world average.
By 2050, 29 countries and territories will have larger elder shares than Japan has today. In fact, the Republic of Korea’s elder share will eventually overtake Japan’s, reaching the historically unprecedented level of 38.1 percent.
Japan’s median age (48.4) is also currently the highest of any country and more than twice that of Africa (19.7). But by 2050, Korea (median age 56.5 in 2050) is also expected to overtake Japan on that metric (54.7).
Three decades ago, the world was populated by more than three times as many adolescents and young adults (15- to 24-year-olds) as older people. Three decades from now, those age groups will be roughly on par.
By income group, the sharpest growth in the numbers of older people will occur in countries currently classified as middle income. This is unsurprising, as these countries make up 74 percent of the world population.
What may be surprising is that the older-population share in middle-income countries is increasing at a much faster rate than in their low- and high-income counterparts.
Moreover, in comparison with high-income countries, today’s middle-income countries are projected to have appreciably greater real incomes when their older-population shares reach comparably elevated levels. This contradicts the common claim that developing economies are getting old before they get rich.
The challenge middle-income countries face is not predominantly insufficient income to take care of their older people. Rather, it is how well institutions and policies can promote economic and social security among older people. Government coffers will be strained by rising pension liabilities and the cost of health and long-term care associated with the expected growth in the incidence and prevalence of chronic diseases such as cancer, among others. These challenges will, however, be partially offset by the increasing, but typically neglected, value older people create through productive nonmarket activities like volunteer work and caregiving. Raising the legal age of retirement, which has been relatively stable in nearly all countries for the past several decades is the other option.
http://www.ipsnews.net/2020/03/population-2020-demographics-can-potent-driver-pace-process-economic-development/ 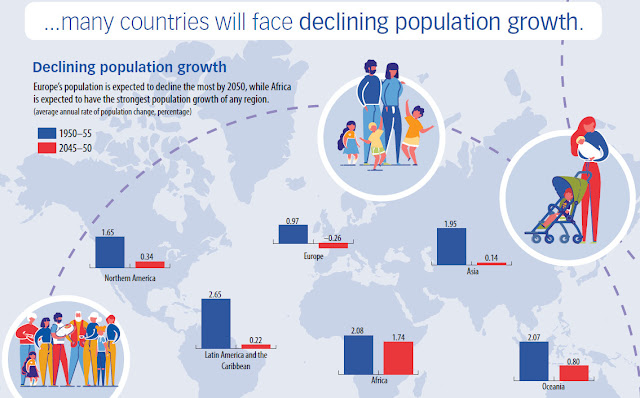 Posted by ajohnstone at 5:56 pm