In the report (pdf), Promises Made, Workers Betrayed: Trump's Bigly Broken Promise to Stop Job Offshoring, researchers at Public Citizen found that Trump's claim that he would deny billions worth of lucrative government contracts to companies that offshored jobs in order to encourage those firms to bring jobs back to U.S. factories was an empty threat.

The report reveals, eight of the top 10 corporations receiving government contracts during Trump's time in office have participated in offshoring.

According to the analysis, of the more than 300,000 U.S. workers who have lost their jobs as a result of worsening trade deficits during the Trump presidency, just over 200,000 of those jobs were classified as offshored.

At least $425.6 billion in public money has gone to firms that moved jobs overseas in the past four years, according to the analysis, which means that "at least one of every four taxpayer dollars spent by the federal government on procurement contracts during the Trump administration went to the pockets of companies that offshored American jobs."

The report states that "the Trump administration awarded an average of 2.5 times the amount, or $10 billion more, in contracts to firms that offshored during his term than those that did not."

According to the analysis, Boeing, General Electric (GE), and United Technologies (UT) have been among the biggest beneficiaries of government contracts during the Trump era even though all three corporations moved jobs to lower-wage locations.

Boeing offshored 5,800 jobs, GE offshored 2,046, and UT offshored 1,572. The latter was awarded $15.1 billion dollars in federal procurement contracts between 2017 and 2019 even while offshoring at least 1,300 jobs at its Carrier subsidiary that President-elect Trump promised to save. Despite President-elect Trump's well-publicized 2016 intervention, during which he gained national attention for pledging to prevent offshoring at Carrier, the jobs of nearly 600 unionized workers at the company's Indianapolis plant and all 700 at its Huntington, Indiana factory were relocated to Mexico in 2017.

"This is straight up promises made, workers betrayed," she said. 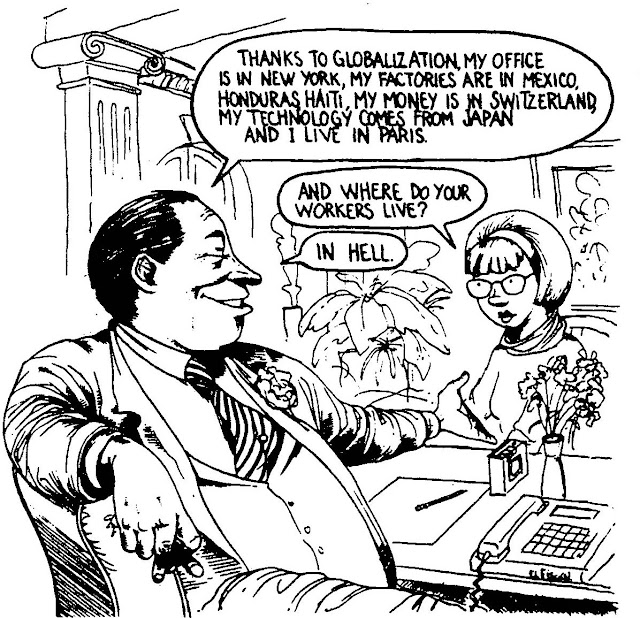 Posted by ajohnstone at 5:19 pm