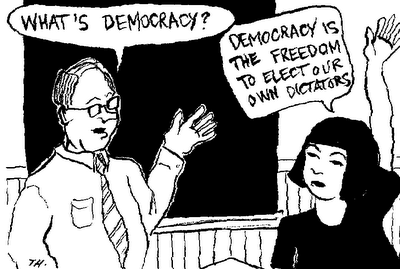 “Democracy isn’t the objective; liberty, peace, and prosperity are. We want the human condition to flourish. Rank democracy can thwart that,

He wrote: ‘The word “democracy” appears nowhere in the Constitution, perhaps because our form of government is not a democracy. It’s a constitutional republic. To me it matters. It should matter to anyone who worries about the excessive accumulation of power in the hands of the few.’

He added: “Government is the official use of coercive force–nothing more and nothing less. The Constitution protects us by limiting the use of government force.”

It is clear to the blog that this politician is simply saying what others are to frightened to state.