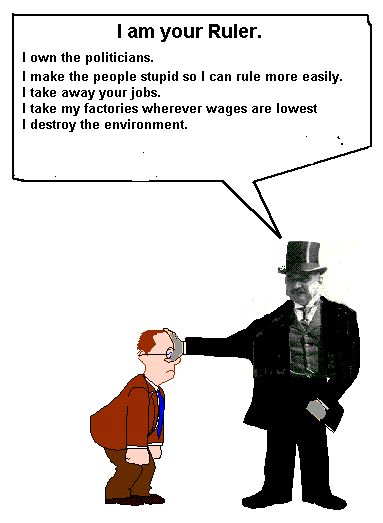 Does it seems unusual how so many crucial issues of our time are barely (or never) mentioned during the presidential campaign by either of the two pro-corporate parties when we are aware that the media are now under the control of a handful of large corporations, run by worshippers of Wall St. The real issues are rarely heard or debated. The success of the two party pro-money political system  in the United States is in getting about half its people not even bothering to vote, and those who do — to vote in favor of what they are oppose to. Keeping this system in place is essential for the rule of a tiny minority. Open totalitarianism would have a very deep negative impact on the economy. Far better is the illusion of democracy.

Let’s tear away the veil of pretenses and the weasel words of those who advocate a vote for the lesser evil. Progressives regularly praise the merits of pragmatism and flexibility, while denouncing sectarianism and dogmatism. They do so to disparage the idea of doing anything other than voting Democratic Party and to foster the belief that they are more just, rational and peace loving. Yet offering only one course of action is the definition of an inflexible dogma. The progressives insist that there should be no other politics than promoting electoral success for the Democrats.

The Democratic Party has scarcely attempted to address the poverty, racism, or sexism experienced by the majority of its voters. Nor has it even secured the simple right to unionize for American workers, or decent standards of health-care. In contrast, it has fully participated in the transformation of the welfare state into the warfare state. Each party claims it is the most fit to run the country, and criticizes the shortcomings of the other.  But despite minor differences that change from one year to the next, the two parties have almost identical programs on the major issues. They both agree to step up exploitation and oppression of working people making them carry the burden of the crisis. The two parties merely compete to prove who is the most faithful servant of their capitalist masters, while they toss a few bones to working people to pick up votes.

Liberal Democrats are always fearful of being exposed as agents of the ruling class. They pose as champions of the oppressed in order to prevent their supporters rejecting them in favor of an independent and militant struggle.  Faking a left position prevents their supporters from breaking with the Democratic Party.

The World Socialist Party declares that you can never have a common movement and a common program with representatives of capital. There can never be common ground. The WSP consistently opposes capitalist politicians of every stripe. There has been no marked clash of class-interests in the political squabbles of the Republican and Democratic Parties, both of them representing, as they do, a united front of various economic groups of the ruling class.

The World Socialist Party does not form election alliances with non-socialists. The reasons for such a policy may be thus summarized:

a) An alliance would be particularly futile since the WSP does not possess large numbers which could actually influence the outcome of an election;

b) An alliance would perturb the class vision of our membership and cause among them great consternation, appearing to them as an obvious deviation from the straight line of class struggle.

c) An alliance would make it impossible for us to explain our refusal to support a candidate of the Democratic Party in the case of a  candidate who may be friendly towards labor.

d) An alliance with another party would make it impossible for us to criticize it. It is a dangerous and unrealistic assumption that we can both support the candidates of the party and at the same time reveal its capitalist character and assert its future betrayal of the working class. It is absurd to assume that we can have common campaigns with a bourgeois party for its bourgeois candidate, and at the same time conduct an independent campaign for socialist program. Even if could help elect the other party candidate, for the working class to gain from such an election would be far outweighed by the harm caused through blurring the class lines and strengthening the capitalist party. The idea of giving the workers an object lesson by inducing them to vote for a progressive liberal in order that they may later be enlightened by his or her betrayal is ridiculous.

e) An alliance would make it appear to our membership that we put all our hopes in parliamentary reforms and that all our propaganda of action for socialism is no more than a phrase. Such a disappointment would repel from the WSP its adherents who wish to see in it not the tail-end of a capitalist progressive party but a committed militant working-class Marxist party.