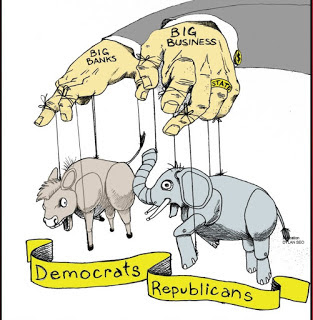 This election is not really a question of whether one votes for Trump or Biden. It is all about whether to actually vote or not. And those who will decide to vote, will be voting against something, rather than voting for something.

Surely in the history of the republic, the American people have rarely faced a presidential election with such difficulties and problems surrounding them. Yet apart from the exploiters and the political cliques which do their bidding in Congress, the great body of the people have clearly indicated their deep, if unorganized, conviction that the old parties offer no way out.  Many have rejected the old politics and the old leaders. Most humans desire only to live their lives with dignity, fulfilment, and human worth, while a parasitic few seek to glorify and unceasingly enrich themselves through the manipulated fears of the rest of humanity.

However in a world where the rule of the capitalist class has brought civilization to the edge of total disaster, the fiction of non-class politics is still assiduously preserved in the United States. The task of the World Socialist Party of the United States (WSPUS) in this election, is to assist our fellow-workers expose the idea of non-class politics to ribbons. Nothing is more pitiful than the concerted attempt of the Democrats and the Republicans to find differences which can justify the fiction that political life consists of the choice between them. Bi-partisanism is the political symbol for tactical divisions among the ruling class. The owning class have been well taken care of. They have been faithfully represented by the Democrat and Republican Parties.US governments, Democrat and Republican alike, have traditionally been stacked full with top business figures. And they have used the government to pursue the general goals of their class ruthlessly at home and abroad. Both parties present a program of  blackmail and banditry. These reformist defenders of the capitalist system and the outright agents of the corporations  have succeeded in initiating the typical splitting tactic of setting one section of workers against another.

Despite the deceit and propaganda on the media, In the schools, in the newspapers, the people cannot be fooled about socialism any longer. They have learned that this capitalist system is the most savage, barbaric system in the history of the world. With the capacity to feed the entire world, there has never been such starvation. With the possibility of peace, there has never been such bloodshed. With the need of housing and school never greater, never has there been such unemployment. Capitalism is a system that demands that honest working people bow down and take orders from common criminals. That is what must change. Working people in this country have long been excluded from the political process. Every election year the people are presented with two sides of the same coin. Either the “liberal” such as Biden, or the reactionary, such as Trump. Although Trump and the forces he represents, the a section of the capitalists, at this time present the greatest danger to the people of this country, let no one be fooled that Biden seeks goals fundamentally different. Since the choice is between the servants of Wall Street who can the working class vote for? Or should they vote at all?  People are fed up with the corrupt, bought-off politicians, so they boycott the elections.

The World Socialist Party is a class party. It frankly admits that a political organization is but an expression of class interest. The party therefore exists for the sole purpose of representing the producers, that is to say, the working class. Seeing clearly the age-long struggle between the producers of the world’s necessities and the parasites upon their backs, the Marxian philosophy of the historic “class struggle” is the foundation of its propaganda and organization work. Representing, as it does, the working and dispossessed class, and having for its program the abolition of the exploitation of the workers through rent, interest, and profit, there can be no compromise between the World Socialist Party and the political expression of the owning class. No policy of partial palliatives will placate us. We will be satisfied with nothing less than the common ownership and democratic running of the means and instruments of production and distribution. Whatever be the attitude of our fellow citizens toward the great world movement for the abolition of war, poverty, and exploitation, known as socialism, one thing is quite certain: from this time on a person will be woefully ignorant of politics if he or she does not become familiar with the principles and program of the World Socialist Party of the United States. The workers, both of hand and brain, are tired of wishy-washy pronouncements on political subjects. What we need is a radical party. The goal of the World Socialist Party is to imbue the people of America with the burning desire and the will to fight for socialism, because the socialist system means real freedom.

How can anyone vote, not for what he or she really believes in, but rather for what he or she thinks is going to happen, anyway? The first battle is on the ballot; but the goal is political power, in order to transfer the wealth of this country into the hands of its rightful owners.

In the words of Rosa Luxemburg: “Those who do not move, do not notice their chains.” Thus, let us  break free of them—for ourselves and humankind.