Electing the captain of the Titanic 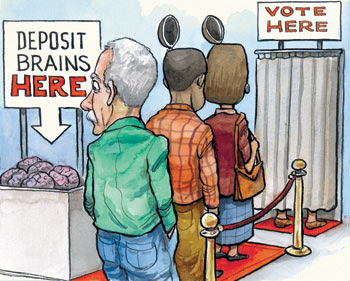 The liberals claim that a vote for Biden is a vote for the lesser evil. Time and again we hear that Biden’s liberalism is the last bulwark against Trump’s fascism. Except that for many around the world, Biden is already a proven evil. Throughout his decades-long political career, Biden has consistently toed the line of the American empire.

Biden has ignored the plight of the civilian populations bombed, maimed and killed by American forces in Iraq, Afghanistan and Syria.

Biden never raised any opposition to the American Service-Members’ Protection Act. Signed into law by Bush in 2002, its purpose is “to protect United States military personnel and other elected and appointed officials of the United States government against criminal prosecution by an international criminal court to which the United States is not party” which allows the US president to use “all means necessary and appropriate to bring about the release of any US or allied personnel being detained or imprisoned by, on behalf of, or at the request of the International Criminal Court (ICC)”. The legislation is to keep Americans from being prosecuted for war crimes, and it is otherwise known as The Hague Invasion Act.

Biden does not want to stand up for international justice.

He described the Egyptian military’s coup against the country’s democratically elected president as “restoring democracy” although it led to civil rights activists, journalists and protesters being detained, harassed, tortured and killed.

In 2014, as defenseless Palestinian civilians in Gaza were enduring relentless Israeli air attacks, he declared that “Israel has a right to defend itself”. There is no intention to remove the American embassy from Jerusalem, nor any possible punitive policies to stem the growth of the Israeli apartheid state as it de facto annexes large parts of the occupied West Bank.

History tells us that neither the Republicans nor Democrats have ever really made the world a safer place. Biden will not be the president to prove that any different. We have had centuries of lesser evil politics which has made the evils in both parties more and more evil with no end in sight of the magnitude of evil to be thrust upon us.

There are scores of articles on “progressive” websites, insisting that we support the candidate of one of the parties of Wall Street, that has promoted war and private health insurance parasites. What’s been missing? Articles advocating an end to the Duopoly and agitation for actual resistance. Docile establishment politics dominate beneath the veneer of liberalism. Why should working people support a proven war-hawk and an authoritarian cop?

The approaching election, as usual, has nothing to do with criticizing the economic system but only dwell on what politicians mistakenly believe they can run it in a better way than anybody else can. We need an entirely new society based on the values of humanity and not the market forces of profit. We need to emulate our communist ancestors and re-learn their cooperative means of survival in modern form. Yesterday was the time to fight for a workers’ movement for revolutionary change, not tomorrow.

Divide and conquer – it’s the same old story of the minority of rich ruling over the majority. The same old line from the rotten bunch of millionaires who own presidents and politicians like Biden, a bought man, just as much as any other politician. We don’t need Biden, any more than we need the rest of the self-seeking, power-hungry, politicians and whole system of capitalist robbery that produces them, one after another. We need working class action and their unity to fight for a decent life, for an end to wars, repression, discrimination, unemployment, poverty, exploitation and the jungle law of dog-eat-dog. We need the strength of our own numbers. We need a mass movement based principles committed to a society based on equality, cooperation, and the real will of the majority.