A nation divided but not the two parties 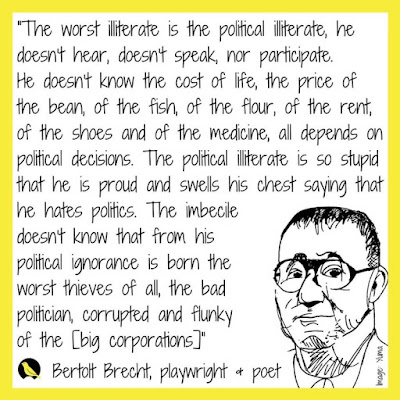 What has the first Trump-Biden debate actually taught us? Not a lot.

American workers can say what they want and do what they want within very broad limits, and their children can study hard in school and college so they can graduate and join the well-off professional class as doctors, lawyers or engineers, but when it comes to social power most Americans have very little if they are not a part of the elite.

Who has the power in the United States? The short answer is those who have the money - or more specifically, who own income-producing land and businesses - have the power i.e., corporations, banks, and agri-industry. How do they rule? Again, the short answer is through open and direct involvement in policy planning, through participation in political campaigns and elections, and through appointments to key decision-making positions in government. Contrary to what we believe America’s two parties are not very responsive to voter preferences. Their candidates are fairly free to say one thing to get elected and to do another once in office. This contributes to confusion and apathy in the electorate. It leads to campaigns where there are no "issues" except "images" and "personalities" even when polls show that voters are extremely concerned about certain policy issues.

The domination by the ruling elite does not mean control on each and every issue and it does not rest upon government involvement alone. Involvement in government is only the final and most visible aspect of ruling class domination, which has its roots in the class structure, the nature of the economy, and the functioning of the policy-planning network. Government has to wait for corporate leaders to decide where and when they will invest.

One point abundantly clear: The mainstream Democratic Party programme as an alternative is paltry stuff. Democrats may disagree with the Republicans that tax cuts and deregulation are the solution, and instead argue that the state should be used to guarantee equal opportunity. For instance, cheap, publicly available education, job training and affirmative action are all justified on the grounds that each American should have the skills to compete and the labor market should treat everyone equally. Yet, the two parties differ only on means, not ends. While Republicans profess a more abiding faith in a self-regulating economy, Democrats believe tailored government interventions are needed. As it turns out, the end that each party agrees on is largely same. The continuance of capitalism.

There exists so many factions each claiming to lay down the correct course necessary to be taken by the working class towards its emancipation. It is vital for our class is to develop a sense of the solidarity and self-confidence essential to the final abolition of wage slavery. Any upsurge in the militancy, resistance and organisation of our class is to be welcome. Socialism demands the revolutionizing of the workers themselves in a battle of ideas. Engels' Preface to the 1890 German edition of the Communist Manifesto:

“For the ultimate triumph of the ideas set forth in the Manifesto Marx relied solely and exclusively on the intellectual development of the working class, as it necessarily had to ensue from united action and discussion.”

Wielding the threat of strikes, organized labor helped generations of Americans. It is often overlooked by the WSPUS critics that many in its companion party, the Socialist Party of Canada, were instrumental in the founding of the One Big Union.)

What we have stated is that:

"The particular form of economic organisation through which the struggle is conducted is one which the circumstances of the struggle must mainly determine. The chief thing is to maintain the struggle whilst capitalism lasts.The spirit of the craft form of Trade Union is generally one which tends to cramp the activity and outlook of the workers, each craft thinking itself something apart from all others, particularly from the non-skilled workers. But capitalist society itself tends to break down the barriers artificially set up between sections of the working class, as many of the so-called "aristocrats of labour" have been made painfully aware. The industrial form of union should tend to bring the various sections of workers in an industry together, and thus help level the identity of interests between all workers so organised."

History has borne this approach out with the rise and growth in America during the 30s of the CIO.

The mission of the World Socialist Party is to lay bare the general trend of capitalist development; to point out unceasingly that, so long as the system lasts, atrocities will be repeated; that they are effects which spring from the very roots of the capitalist system, because they are grounded in the soil of competitive rivalry for world's markets, trade routes, etc. The only remedy is to remove the cause, capitalism, and replace it by a worldwide co-operative commonwealth.