Births in Germany are down, while its population ages. It's a similar trend in other countries. A new study predicts a dramatic reduction in the world's population by the end of the century.


"I don't want to have a child until I'm really ready for it." This is the kind of statement Hamburg gynecologist Christine Biermann hears a lot from her patients. "The search for the perfect job and the perfect partner are deciding factors for women to put off childbirth for several years," she says.
Better educated women have fewer children — not only in Germany, but everywhere. Germany would need a birth rate of 2.1 children per woman to offset deaths and stop the population from shrinking. Such numbers have not been measured since before the birth control pill was introduced in the 1970s.
Historic records show economic instability having a negative effect on a country's birth rate. Germany, for example, saw a dramatic decline in births in the early 1930s, after the Great Depression, and in former East Germany following reunification in 1990. The resulting economic decline brought the birth rate in that part of the country to a record low of 1.2 children per woman. Demographers expect the birth rate to be impacted again, in Germany and elsewhere, as a result of recession brought on by the coronavirus pandemic. A spring survey by the London School of Economics found the coronavirus epidemic has had a predominately negative effect on the fertility plans of people 18-to-34 across five European countries: the UK, Italy, France, Spain and Germany.
Germany's population has not shrunk because of immigration. Since the 1950s, when Germany actively recruited workers in southeastern Europe for its booming economy, the number of people moving to Germany has been high. The biggest influx was seen in 2015, with over 2 million arrivals: Economic migrants from southern Europe, but also refugees from Syria and other crisis regions. Immigrants tend to be young, educated, have jobs and pay taxes — and have young children. In 2016, the German statistics office measured an above-average birth rate for the country. Many of the children were born to women from southern Europe. "Many young people come to Germany and that balances out our birth rate deficit," says demography expert Deschermeier. "In a way, Germany profited from the economic crises in southern and southeastern EU countries." In 2019, the birthrate among immigrants was well above the average and stood at over 2 per woman.
But here, too, there is a correlation between education and childbirth: Migrants with higher education have as few children as their German counterparts.
Meanwhile, life expectancy rises around the globe. Even continued immigration of young people will not prevent German society from ageing. The next few years will see the "Babyboomer" generation, born in the 1950s and 1960s, as well as the first generation of immigrants heading into retirement. Already only 18% of Germany's population is under the age of 20 — a marked drop from 30% in 1950. Back then one in 100 Germans was 80 or above. Now it is one in 15 — in 2040 it is likely to be one in 10.
Worldwide, a study predicts the 80-plus population will balloon from its current 140 million to 866 million by the end of the century. As workforces shrink and demand on public healthcare and pension systems grow, although not necessarily.
"It is the productivity of a society that is the most relevant," says Wolfgang Lutz, founding director of the Wittgenstein Centre for Demography and Global Human Capital.
https://www.dw.com/en/demography-german-birthrate-down-in-coronavirus-pandemic/a-54395345 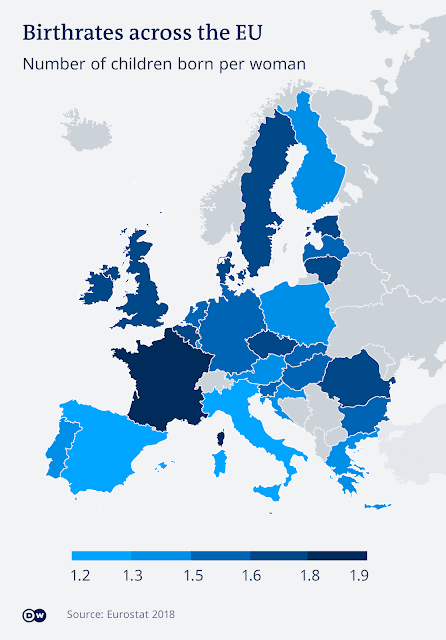