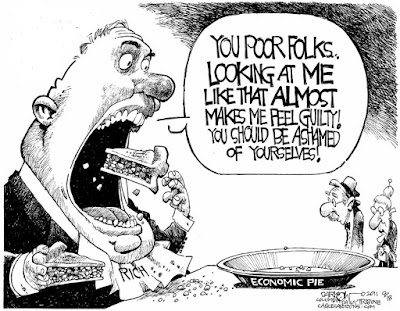 Bezos is among the elite set of American billionaires who have seen their net worth skyrocket since the pandemic began. The wealth of Amazon's CEO has grown by $74 billion since the beginning of the year and now sits at approximately $189 billion.


The pandemic has also ushered in a crisis of housing insecurity, with nearly a third of Americans missing their mortgage or rent payments in June. Twenty percent of renters didn't pay their rent on time in May and 31% weren't able to in April.

While Amazon reported $13.9 billion in income in 2019, Bezos' company managed to pay just $162 million in federal taxes last year—a 1.2% tax rate despite the United States' 21% federal tax rate for corporations. The previous two years, according to the Institute on Taxation and Economic Policy, Amazon paid $0 in federal income tax.

While setting a new record on Bloomberg's Billionaires Index, the group wrote, Bezos' company also cut a $2 per hour temporary raise given to warehouse employees when the pandemic began and in May Amazon reportedly told workers its paid sick leave policy doesn't apply to its warehouses.

Bezos gained $13 billion today. That’s more than the GDP of about 50 countries. Bezos has added $61.4 billion to his net worth this year. A report in from the US labor department suggests that if the US Economy does recover the vast majority of US workers can expect to return to work at a lower wage. This will be due primarily to two factors. One an overly large pool of unemployed workers all competing for the same job and secondly the Corporations needing to recover lost profits through the pandemic. There are already a large number of “white collar workers” who have taken wage cuts so as to keep their jobs and those Corporations will not restore those cuts when (if) the economy recovers.
Posted by ajohnstone at 6:00 pm